Are You Within 3 Degrees of the NSA?

As an aside during testimony on Capitol Hill today, a National Security Agency representative rather casually indicated that the government looks at data from a universe of far, far more people than previously indicated.

Chris Inglis, the agency's deputy director, was one of several government representatives—including from the FBI and the office of the Director of National Intelligence—testifying before the House Judiciary Committee this morning. Most of the testimony largely echoed previous testimony by the agencies on the topic of the government's surveillance, including a retread of the same offered examples for how the Patriot Act and Foreign Intelligence Surveillance Act had stopped terror events.

But Inglis' statement was new. Analysts look "two or three hops" from terror suspects when evaluating terror activity, Inglis revealed. Previously, the limit of how surveillance was extended had been described as two hops. This meant that if the NSA were following a phone metadata or web trail from a terror suspect, it could also look at the calls from the people that suspect has spoken with—one hop. And then, the calls that second person had also spoken with—two hops. Terror suspect to person two to person three. Two hops. And now: A third hop.

So imagine you have 100 people in your contact list (I once managed a monthly newsletter with about that many).  If your contact have 100 also, the "first hop" gets a list of 10,000 to monitor,  the second hop get 1,000,000 (one million for the innumerate), and the third hop gets you to 100 million.  Now, redundancy will collapse a lot of that (friends of your friends are more likely to be your friends than random people).  Still, It doesn't take too many on the terrorist watch list before most the US is being monitored by the NSA.

So that's why is my machine running so slowly... 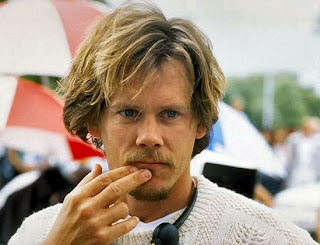 Six Degrees of Kevin Bacon is a parlor game based on the "six degrees of separation" concept, which posits that any two people on Earth are six or less acquaintance links apart. That idea eventually morphed into this parlor game, wherein movie buffs challenge each other to find the shortest path between an arbitrary actor and Hollywood character actor Kevin Bacon. It rests on the assumption that any individual involved in the Hollywood, California, film industry can be linked through his or her film roles to Kevin Bacon within six steps. The game requires a group of players to try to connect any such individual to Kevin Bacon as quickly as possible and in as few links as possible. It can also be described as a trivia game based on the concept of the small world phenomenon. In 2007, Bacon started a charitable organization named SixDegrees.org.

Yeah, he kinda looks like he could be a terrorist.
Posted by Fritz at 11:26 PM