So Let's Really Have a Conversation About the Zimmerman Trial

If you only read one thing on Trayvon Martin/George Zimmerman today, read Althouse:
"Why are black boys expendable?" is the heartwrenching question on the front page at the Washington Post.

Eugene Robinson is, of course, one of WAPO reliably liberal columnists.  Kind of like E. J. Dionne, but blacker, and less clever.  I rarely read him, and when I do, I feel that it's been a mistake and a waste of a few precious minutes, so it's not a great surprise that I skipped over his column this morning, seeing in the first paragraph that it was going in the predictable liberal, fact free direction, and decided to look at something less polemical, like the Tom Toles cartoon... 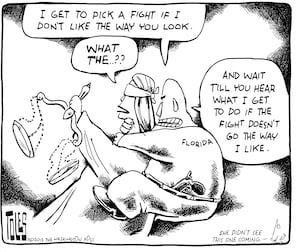 However, in a fit of masochism, Ann Althouse, law professor at University of Wisconsin in Madison, and frustratingly unpredictable in her politics (Obama in 2008, ? in 2012), actually read the horrid thing and reacted to it...

..."This is the conversation about race that we desperately need to have — but probably, as in the past, will try our best to avoid."

Here's my response to what you just said. I think our society demonstrated great care toward Trayvon Martin, even to the point of putting Zimmerman through a trial that should not have happened. That is, it was an excess of care for Martin, a bending-over-backwards to show that we care about Martin and all the young men he was seen to represent. And now, after an extensive, careful trial, and a jury verdict that clearly hewed to well-honed instructions about evidence and burden of proof, you still want to use it to assert that we don't care. If that's the kind of conversation we get when we try to respond to the invitation to have a conversation, can you see why it's something we avoid?

Reading further into the article, I see I've got to take back my overly optimistic statement "I'm sure Robinson knows that." I'm not sure, because to say I believe that Robinson knows that — "If Trayvon Martin were on trial for beating up George Zimmerman and had argued that he acted in self-defense, the jury would have had to view Zimmerman as guilty until proven innocent" — is to say that Robinson is deliberately deceiving when he writes:

That assumption is either ignorant or shamefully deceptive. The accused is the one whose rights are systematically protected in the criminal process. Is that too boring? Ho-hum?! Ho-hum for all the rights of the criminally accused! Even if all Robinson cares about is how young black males are treated, young black males — the ones that still live — need these rights too. If the police — who had already been called — had arrived before Zimmerman saw fit to shoot his gun, if they had caught Trayvon Martin on top of Zimmerman, pinning him down, and knocking his head into concrete, they would have arrested Martin, and Martin would have benefited from those rights you think are ho-hum when they protect Zimmerman.

I'm tired of people telling me we need a conversation about something, and then telling me to shupt up.
Posted by Fritz at 5:01 PM