Man Swims 5 Hrs to Save Family in Chesapeake

John Franklin Riggs left family members clinging to a capsized boat in a sea of stinging jellyfish, swimming miles and climbing rocks at the shoreline in pitch blackness to reach help at the first house he saw.

"He came to the right house," said Angela Byrd, whose dog's barking awakened her quiet house in Chance at about 1 a.m. Wednesday morning. There stood Riggs, soaking wet and barefoot.

"He said, 'I've been swimming since sundown; I need help,' " she said.

The 46-year-old Riggs was a member of a fishing party in the Sharksfin Shoal Light, a popular fishing area by a lighthouse in Tangier Sound. A storm brewed and their boat took on too much water and toppled at about 7 p.m. Tuesday, said Byrd, recalling the conversation with the stranger at the door.

That's a remarkable swim.  The water is nice and warm now, so hypothermia isn't much of a threat, but that area of the Bay is pretty uninhabited, and dark at night.  I've been there. I wouldn't want to swim in from out there. And the jellyfish are just awful right now.  Good fishing, though. Here's a map to help, courtesy of Maryland DNR. Sharkfin Shoal is shown at the top, and Chance is on Deal Island, just to the east and slightly south. 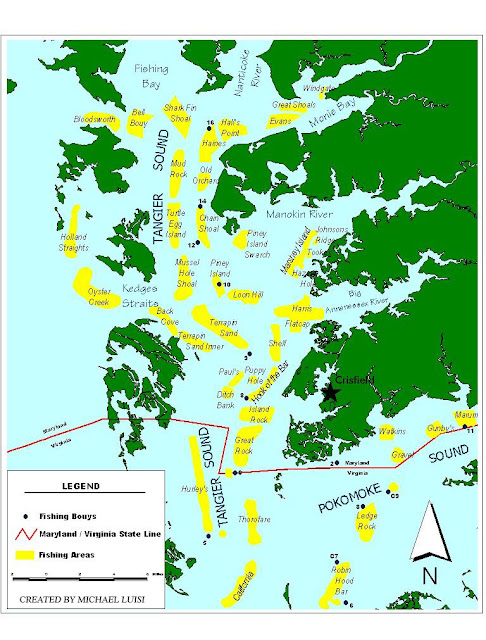 Contessa Riggs said the boat capsized about two miles from shore, and drifted about five miles in a parallel direction when the tide turned.

"I've never been so happy to see search boats in my life," she said Wednesday by telephone. "It took him five hours to swim ashore. He had to stop and grab a crab pot buoy and rest, then swim.

"We clinged to the side of the boat and got stung by sea nettles in the dark," she said.

Perhaps someone would have located the fishing party, eventually, even if Riggs had not swam for help. What is certain is that wearing life jackets saved their lives, Albert said.

UPDATE: A more complete article in the WAPO
Posted by Fritz at 8:58 PM