Not Having Enough Important Work, TSA Gets Into Slut-Shaming 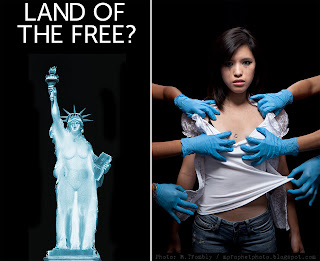 A Transportation Security Administration (TSA) agent allegedly told a 15-year-old girl at Los Angeles International Airport to "cover herself" before she boarded her flight.

A 15 is a year older than is necessary to be to consent to a homosexual relations ship, at least in the minds of the #FreeKate krowd. So lighten up, TSA bitch lady.


The girl's father, BoingBoing.com website editor Mark Frauenfelder, posted an article about the exchange on Sunday evening. In it, Frauenfelder alleges that the TSA agent "humiliated and shamed my 15-year-old daughter."

If the mother and father doesn't care, why should it be up to the TSA lady to reprimand her?


"Here's what happened, as my daughter described it in text messages to us," he wrote.

"She was at the station where the TSA checks IDs," Frauenfelder continued. "She said the officer was 'glaring' at her and mumbling. She said, 'Excuse me?' and he said, 'You're only 15, COVER YOURSELF!' in a hostile tone. She said she was shaken up by his abusive manner."

It's hard to imagine a 15 year old girl being "shaken up" by an off hand comment by a grumpy old lady; more likely she was pleased to be noticed, and was playing the drama card. 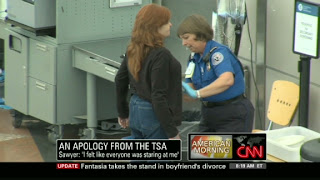 Frauenfelder said his daughter was traveling with a group of other high school students who were going on a college tour.

He said that he and his wife met with the TSA's leadership at LAX and he said the agent's supervisor at the airport was "apologetic, concerned, and professional." 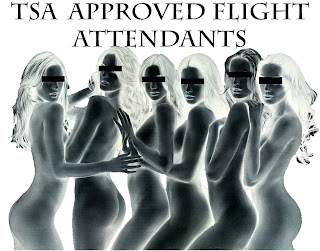 It's good to know that the TSA has taken care of all the terrorists, and is working it's way down to the teenagers wearing provocative clothing.

No, wait a minute, no it isn't. They're the only redeeming feature of air travel, since they did away with "free" meals.


William Teach at Pirate's Cove links with "Sorta Blogless Sunday and Pinup" #390. Wombat-Socho at The Other McCain checks in with his weekly compendium of  the original Rule 5 series "Rule 5 Monday" in a plain brown wrapper.
Posted by Fritz at 6:00 AM