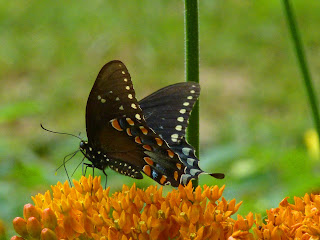 A little stuff from the garden today.  I noticed another "black" type swallowtail out today, so I chased after it with the camera.  Unlike the black morph Eastern Tiger Swallowtail from yesterday, this one turned out to be the 'Spice Bush Swallowtail' aka 'Green-Clouded Swallowtail' (Papilio troilus).  The signature identification is the blue-green  'comet' that replaces the second from the bottom orange spot in the inner row of orange spots on the bottom of the wings. 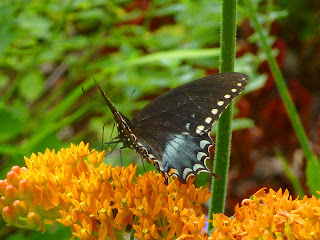 There are other differences.  The blue-green glitter smear on the top of the rear wing is also much greener than than on the Tiger Swallowtail,  the 'swallowtail' is shorter and more spoon-shaped, and the body has many yellow spots.  Still, you have to get a pretty good look to tell them apart. 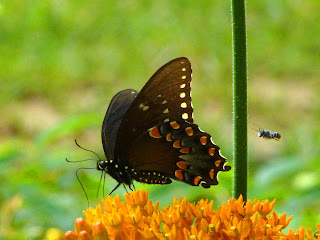 All the 'black and blue' butterflies in the region are reputed to benefit from a resemblance to the toxic Pipevine Swallowtail.  Apparently Pipevine Swallowtails taste really bad, and are toxic from the Pipevine they eat as caterpillars, and birds are widely conditioned to avoid them.  They must provoke a strong reaction, as the actual numbers of Pipevine butterflies, at least around here, seems pretty small (I have yet to find one). 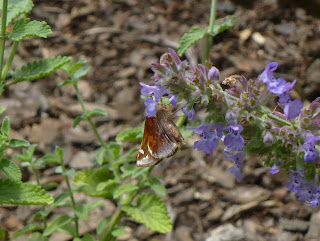 For a while I thought I had a new one today, this small skipper.  It turned out to be a female Zabulon Skipper (Poanes zabulon).  I had no luck getting a dorsal picture, but that's supposed to be pretty plain in any event.  It turns out it was one of the few skippers I succeeded in identifying last year, although I probably didn't post it. 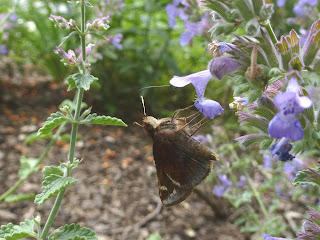 A second shot which, although a little darker, gives a good look at the head and thorax. The species is strongly dimorphic, with the females darker, with the frosted edges, and the males orange (like so many skippers) with dark marking along the edges of the wings, seen from above. 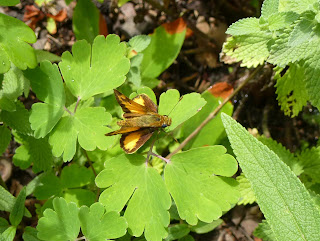 Then, a little later, the male came by. Following the scent trail, late for a date, or just a coincidence? 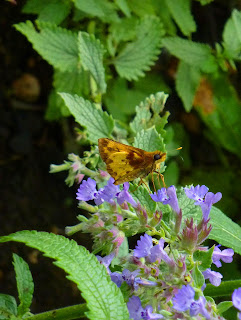