Two stories today about rescue of cute and charismatic fauna in the Chesapeake Bay. 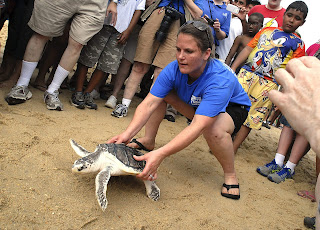 Sea turtles returned to the wild at Point Lookout


A crowd gathered on a Point Lookout State Park beach Saturday afternoon to watch seven sea turtles saunter into the water after going through months of rehabilitation.

The turtles, one green and six Kemp’s ridleys, were celebrities if for only moments as their handlers released them amid cheers and a barrage of photographs from gathered beachgoers...

A particularly cold 2012 season stunned sea turtles in record numbers, according to the aquarium. The aquarium in Baltimore helped by taking in 13 sea turtles for rehabilitation last December. 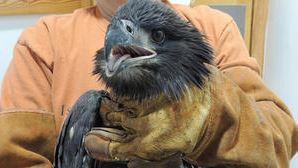 
While the recent quick moving storm was mild for humans, the area lost a young eaglet after it and a sibling were blown from their Jamestown Island nest.

Staff at the Historic Jamestowne Visitors Center, who had a good view of the nest from the parking lot, spotted one fallen nest and chick the evening of June 13. They emailed Stephen Living, a wildlife biologist with the Virginia Department of Game and Inland Fisheries.

Living knew another eaglet was likely affected. The department had banded the birds about two weeks before the storm. He went out the next morning and spotted two eaglets. "We found both birds on the ground, both mobile," he said. "There were no obvious injuries to either bird."
...
When a center veterinary examined the chicks, one was "quiet and not standing," the center's update notes. The vet placed it in an oxygen chamber, but it died the following afternoon. The center sent tissue samples to an outside laboratory for diagnostics. Staff suspects "capture myopathy," which it defines as a metabolic condition associated with stress.

The other eaglet, weighing almost seven pounds, is doing fine, outreach director Amanda Nicholson said. At first it was reluctant to eat offerings of chopped rats, but has since "decided our food is good enough," she said. It is now eating whole rats and fish.

But, but, who is going to teach it how to ambush Ospreys and steal their food?  I hope it's instinctive.

I have mixed feeling about wildlife rescue, especially when performed by government agencies.  Life in the wild is a brutal business and natural selection works it's magic thereby.  Saving a lucky individual doesn't do much to thwart it, but it certainly doesn't help, except to breed animals dependent on humans.

I love my local eagles, and I'd probably do what I could to get one in trouble on my beach rescued, but frankly, Bald Eagles aren't endangered here, and in fact, it seems like there is not enough space for our locally breed eagles to settle, and they are force to look further afield for territory.

Kemp's Ridely sea turtles, on the other hand, are critically endangered.  Keeping just a few more alive might help determine the survival of the species, which was mostly threatened by hunting, trawling, and habitat loss.
Posted by Fritz at 8:09 PM