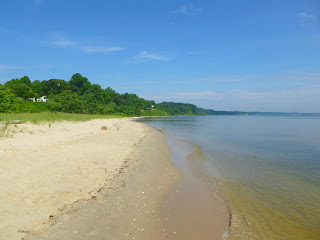 Sort of a sad day for me at the beach.  We left Skye behind for the first time ever because she had such a tough time yesterday, actually having to lay down for a rest to complete the short walk.  Otherwise, it was nice; the sun came out just about as we arrived, it was warm without being hot and muggy, and not windy at all. 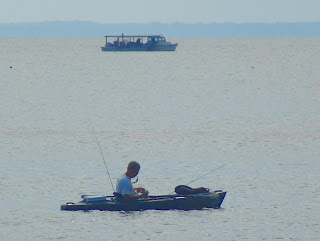 There was a little activity on the beach when we arrived, but not as much as the weather warranted; however, more people arrived as we walked. 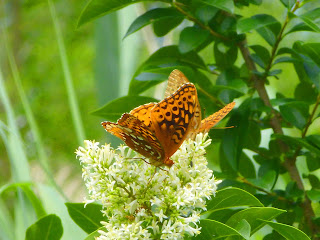 A couple of Great Spangled Fritillaries sipping nectar from a bush growing on the cliff.  I also saw a Spicebush Butterfly down in the weeds, but my photos weren't worth much. 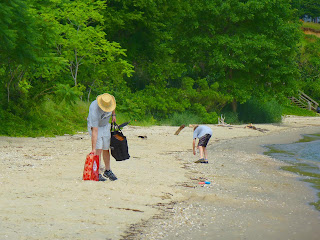 A friend from work and his son came all the way from Annapolis to fossil hunt.  The son is a devout fossil hunter, and quite observant. While we talked, he steadily raked in a variety of fossils, including shark's teeth, ray plates, sand dollar bits (if you break a sand dollar do you get sand half dollars, quarters, dimes, nickels and pennies?) 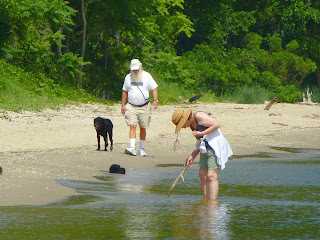 Georgia seen poking along behind, looking for fossils, while Red and Joel come up from another lap up and down the beach. 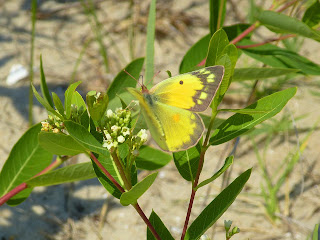 There was much the same assortment of butterflies hanging around the dunes as yesterday, but today, the Clouded Sulphur co-operated by flapping it's wing just in time for my photo (but to be fair, I have a lot of shots of closed wings).
Posted by Fritz at 1:38 PM