The Weather People are Using the "D" Word for Tomorrow

"D" as in derecho

Tornado warnings stretched over four states Wednesday night as a massive storm system menaced the biggest cities of the Midwest, pushing tornadoes, extraordinary winds and heavy rain — and perhaps even a derecho, a rare, explosive wind pattern that's like a hurricane on land.

A tornado was spotted about 7 p.m. (8 p.m. ET) near Savanna in Carroll County in northwest Illinois and was heading southeast at 30 mph, the National Weather Service said. It said mobile homes would be heavily damaged or destroyed and warned of flying debris "deadly to people and animals."

A Carroll County sheriff's dispatcher told NBC News there were reports of injuries, but it was too early to have any indication of their number or severity.

Tornado warnings — meaning a tornado had been confirmed or that conditions were such that one was imminent — were in effect for a dozen or more counties in Iowa, Illinois, Ohio and Indiana.

It was the leading edge of a storm system with almost 75 million people in its path at the beginning of what Mike Seidel, a meteorologist for The Weather Channel, said was going to be a "long and ugly night" for Chicago, Detroit, Cleveland, Indianapolis and the rest of the Midwest.

We are sensitive to derechoes here after last June 29ths big derecho which screamed out of the midwest, all the way out here to coast, causing millions of dollars in damage. Besides, it's a new word to most of us, so we have to use it a lot to make it stick.  For us, it was a brief period of high wind, and some loose debris from the trees; for many up in Washington DC it was days without power. 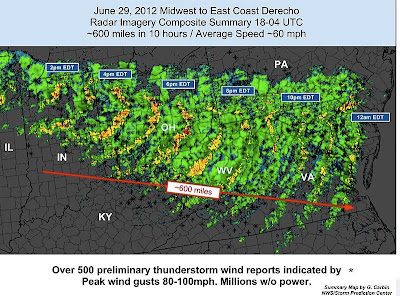 Derechos aren't really that rare; they are a once every few years sort of event for most of the east coast (whether you recognize them or not), and perhaps yearly in some favored places like Oklahoma. Certainly more common than tornado strikes on a given piece of land. 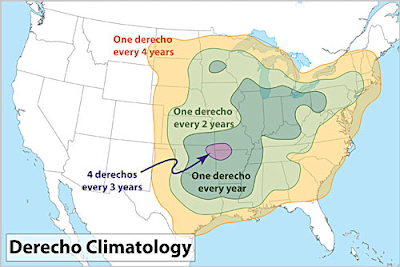 So between Tropical Storm Andrea, the tornado watch the other night, and a possible derecho, the weather has been livelier than usual.  Stay tuned for reports.  Tomorrow promises to be interesting.
Posted by Fritz at 9:49 PM