Bay About the Same, According to Bernie Fowler's Feet

The contrast was significant. As political as the 2012 Patuxent River Wade-in was, the 2013 event was more devotional. This year’s event included the baptism of its central figure, former state senator Bernie Fowler. While the unscientific data the Sunday June 9 walk into the Patuxent yielded was a slight digression from last year, Fowler did not appear discouraged. In fact, the sense of commitment by those in attendance appeared to buoy his spirits.

The 26th annual wade-in was held at Jefferson Patterson Park and Museum (JPPM), the fourth event held at the new venue after several years at Broomes Island. Fowler forged the partnership with state government in order to institutionalize the wade-in so that it will continue after he is no longer able or around to preside over it. Fowler, who dons blue overalls and old, white sneakers, walks into the river with family, friends and elected officials. When he can no longer see his sneakers, Fowler and the rest of the hand-clasping human chain stops. Fowler then has the waterline on his overalls measured. Last year the line was up to 35 inches. This year the mark was 34 inches.

Bernie's "Wade-In" index is a highly popular, but unscientific way to measure the progress of the clean up of the Bay.  It all started with his childhood reminiscences of being able to see his white sneakers while wading chest deep in the Patuxent River for crabs (I figure he was about 4 ft tall at the time).   The transparency of the River (as indeed, to a lesser extent Bay at my beach) varies considerably from day to day, depending on weather and the state of algae blooms.  If you get in the rare periods between major storms and algae blooms the water can be surprisingly clear.

An old picture of Bernie conducting an 'alternative' wade in at an Open House at the Smithsonian Environmental Research Center, a few years ago. 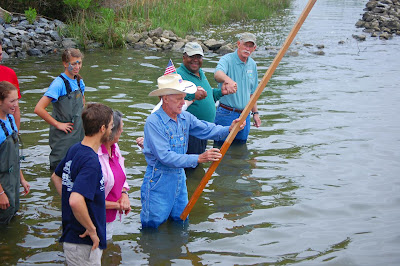