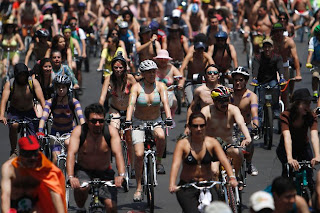 And I don't mean nude bicycles...


Some 3,000 demonstrators – some bare head to toe, others in bathing suits or underwear – braved catcalls and embarrassed smiles from residents as they biked some 12 miles to end up in Guadalajara, the biggest city in Jalisco state. 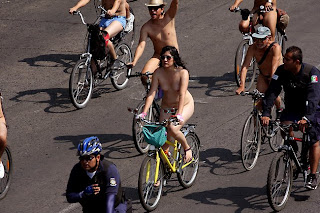 Looks like the bathing suit option was a fairly common approach, but there are a few die-hards.

In downtown Mexico City, nearly 2,000 bikers – naked or scantily clad – also demonstrated. Some slapped "fragile" stickers on their bodies or painted messages on their skin: "more bicycles, less pollution," and "the city is for everyone, let bikes pass."

By stripping bare for the ride, the cyclists aimed to highlight the fragility of riders, and the risks they face, on busy roads. 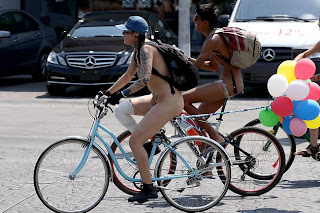 Mexican traffic is truly horrendous, as even a casual visit to Mexico will reveal. They don't care much for their own lives, let alone someone on a bicycle. A close friend from grad school, a Mexican student from La Paz was killed in Tijuana in a collision with a truck.

But for the protesters in Guadalajara, it was also a chance to take a swipe at the conservative climate in that state.

"It's a very conservative city, and I believe that daring to (cycle naked) pushes beyond the limits of the Catholic sense of morality," said bathing suit-clad Lucia Escalante, participating in the rally for the first time. 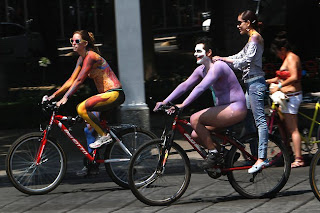 This is what we need on the Capitol Beltway.  Just on a day when I don't need to use it (that would be most days).  Rte 4 needs a good nude protest or two as well.

"That's why it's more important to show here that we are free," the 27-year-old added.

Jalisco, the home of tequila and mariachi music, has in recent years hosted a number of similarly provocative events, including Mexico's biggest gay pride parade.

It's just Mexico, so like I often say to Femen, whatever you're against, I'm for.  Keep the protest alive!

Wombat-Socho's world famous (not that that's a high bar these days) weekly Rule 5 post "Rule 5 Sunday: Father's Day" came in on time this week at The Other McCain.
Posted by Fritz at 6:00 AM