A Bad Half Day Fishing... 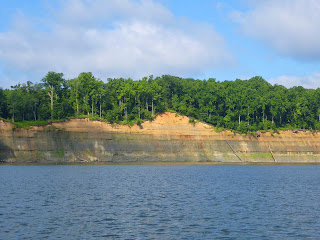 ...Is still better than a full day working.

Trevor and I met at the boat a little after 8 AM for fishing.  The sky was overcast earlier in the morning, but was breaking up into partially cloudy and sunny day, and got sunnier as the day progressed.

A view of Calvert Cliffs I don't often show, with the morning sun.  Note the many layers of sediment that form the cliffs. 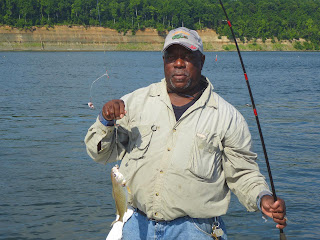 Fishing was, well, to be strictly true, pretty awful.  No decent striped bass, although we tried all our common holes, and some not so common.  We could have fished for 12 inch fish (below the 18 inch legal limit) at the head of the CCNPP discharge, but that gets a little boring, and your bound to kill a few if you keep at it.  We did however, find a few small croaker (shown at left) and large spot out a ways. 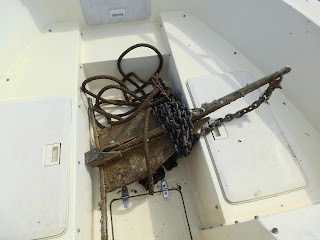 We saw another boat struggling with an anchor, and we went over to see if there was a problem.  It turned out the guy had snagged a huge lost anchor with his own, and was trying to figure out what to do.  He didn't want to throw it back, as a possible hazard, but it was all over grown with barnacles and other fouling, and he didn't want to take it on board with his wife and kids and clean boat... We offered to take it, and he let us.  It's a charter boat sized Danforth anchor with 50 ft of heavy chain. I'll probably scrape off most the the junk and take it to the local marine consignment shop and try to find it a new home.  It's way too heavy for me. 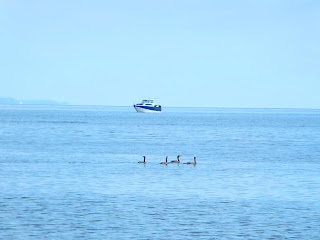 There was a huge pod, school, flock of cormorants hanging around the power plant, more than I've ever seen before.  This is just a small group of them to the outside. There must be a decent amount of small fish around to attract them like that. 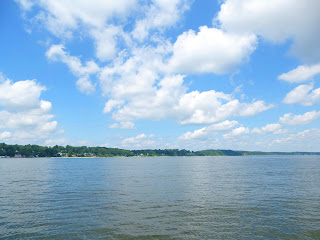 After 4 hours of beating the water for fish, we finally gave up and headed for the harbor.  Still a pretty nice day, although the temperatures were heading up near 90, and the humidity was up in the annoying, but not oppressive range.
Posted by Fritz at 7:48 PM