School officials in Calvert County, Maryland have denied a request to expunge the suspension of the kindergartener who brought a plastic cap gun on a school bus last month and then wet his pants during a subsequent interrogation.

The refusal came in the form of a letter dated Friday, reports The Washington Post. The letter stated that the five-year-old “did bring a cap gun in his book bag.” It also charged that some other children were frightened and told school officials that they couldn’t discern if the orange-tipped cowboy-style gun was real or fake.

The unidentified kindergartener had brought the toy gun in his backpack because his friend had brought a water gun the previous day. He later told his mother that he “really, really” wanted his friend to see it.

Right, because they really want to deny the 5-year old kid the opportunity to go to the best possible
school when he eventually stumbles out of the Calvert County School District and into real life.

To be fair, though, I think the threat "This will go on your permanent record" is one of the most hollow threats that school authorities have to wield.  Does anyone believe that colleges et al are actually going to read about the stupid stuff kids did when they were 5? 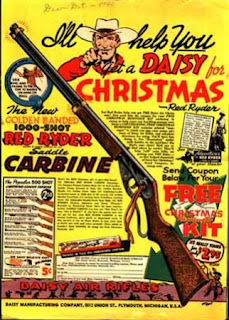 From the article it's clear that 1) Calvert County is becoming too urban, if other students were frightened by a clearly fake cap gun (which I doubt; I suspect the admin is lying about this to justify their behavior) and 2) the school officials are incompetent if they don't know that the orange tips are added to toy guns now to distinguish them from real weapons to people who are utterly ignorant about them.

As long as I'm on the topic of guns, gun control and education, I've got a couple of other articles to share:

What if we looked at cars the same way we look at guns?


...suppose educators instead declared that cars themselves were harmful instruments of death and destruction with no useful purpose. Then they began punishing students at all ages, even down to kindergarten level, for such "offenses" as drawing pictures of cars, bringing toy cars to school or even mentioning the word "car." You'd likely think this was an extreme overreaction, a textbook example of irrational behavior that was likely to punish innocent students for harmless words and actions.

Now, substitute the word "guns" for "cars," and you have a description of what appears to be a widespread mindset on the part of school officials nationwide that one psychologist and family doctor has called "psychotic."...


...Sax said he worries about the long-term effect, particularly on boys, of being told the games they play make them bad. “Out-of-touch policies such as these, which criminalize behaviors which have always been common among young kids, are contributing to the growing proportion of American kids, especially boys, who regard school as a stupid waste of time and who can’t wait to get out of school so that they can get back to playing their video games,” Sax said...

“There are more effective ways to encourage good behavior and to discourage criminal behavior, without disengaging boys from school altogether,” Sax said...