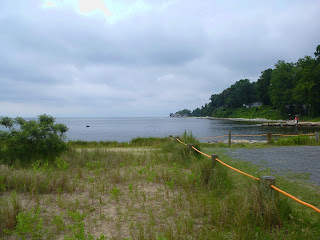 Unlike yesterday's clear skies, today was completely overcast, and thunderstorms are in the forecast for the afternoon.  However, the clouds have the temperatures down, so even though to humidity is up there, it was a pretty tolerable day to walk the beach 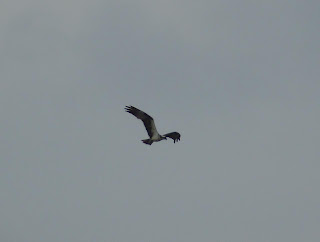 An Osprey was hanging around the harbor mouth, doing some hunting.  Ospreys are nesting now, and the chicks require a lot of food.  Life for Osprey parents is almost non stop fishing, not so bad except that it requires crashing into the water head first from many feet up. 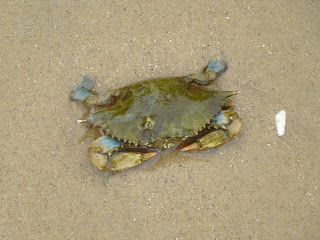 Despite the other Bay scientists promise of a "low anoxia year" we appear to have had a bit of a "crab jubilee" here caused by low oxygen.  There were many crabs in the surf line, as well as a variety of fish, including a Red Hake, Skilletfish, pipefish and others. 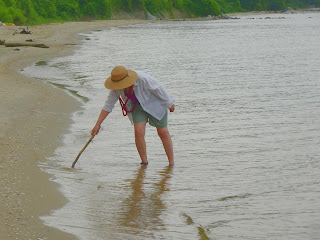 Georgia poking around for shark's teeth.  Today was the monthly count of teeth, and we had over 150 for June. Pretty good, although I've had single days that good (over course, I walked almost 6 miles of beach to do it). 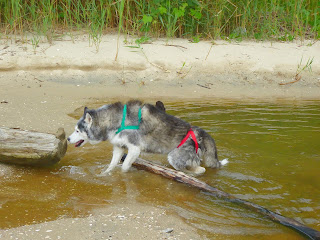 Skye showing off her new all body harness system(to make it easier for us to hold her up).  It looks awkward, but she put up with it pretty well 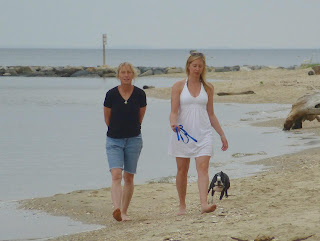 Not a good sunbathing day, but there was one mother/daughter combo out walking the dog.
Posted by Fritz at 1:32 PM