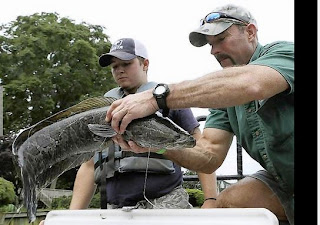 And some people are less than upset:

A report from the Eastern Shore puts the northern snakehead — that slithery, toothy Frankenfish introduced to Central Maryland by some ecological saboteur a decade ago — in Marshyhope Creek, suggesting that the invasive species has moved beyond the Potomac River, across the Chesapeake Bay and into the Delmarva Peninsula.

Or, here's another theory: Some scoundrel caught a few snakeheads on the Western Shore, transported them across the Bay Bridge and stocked them in either the Marshyhope, east of Hurlock, or the Nanticoke River into which it flows.

Joey Love, snakehead expert with the Maryland Department of Natural Resources, subscribes to the latter theory, but acknowledges the possibility of the fish's natural expansion. "We are currently investigating the genetics of the populations to determine if we can decipher which hypothesis has some legitimate support," Love says.

Either way, Frankenfish expansion probably isn't good news for the Chesapeake ecosystem. The state still thinks they should be fished hard and eaten often.

While the authorities continue to fear the "Frankenfish", fisherman have been coming to terms with them:


In fact, Austin Murphy, who fishes for them regularly — and passionately, with a fly rod — says he sees the region becoming a destination fishery for people who like to go after big, aggressive species. Snakehead could even provide a modest economic boon to Maryland.

Murphy, founding director of the coming weekend's Potomac Snakehead Tournament, likes to stand on an elevated platform of a boat, in the manner of guides who scout bonefish in the Florida Keys or redfish in South Carolina. He only casts to snakeheads he can see.

I have a snakehead fishing trip scheduled with Capt. Mike in August, and I hope to be able to report back on their fighting ability and their tastiness.
Posted by Fritz at 8:22 PM