Indiana Woman Shoots and Kills Leopard Prowling in Her Backyard

Last Thursday, a woman in Charlestown, Indiana and her boyfriend stayed up all night, armed with a rifle, to hunt down whatever it was that had been attacking small animals in her neighborhood. After spotting and shooting a creature prowling in the shadows by the woman's pool, they were shocked to find that they'd just killed a leopard, an animal that's not native to North America, much less Indiana. 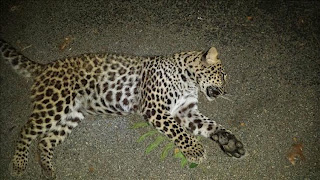 I hope she was using something bigger than a .22 long rifle.  There are lots of stories about wounded leopards that have bad endings.


The woman, who didn't want to be identified, mentioned the story to her friend and neighbor Donna Duke, who then told ABC affiliate WDRB about the strange kill. Officials at the Indiana Department of Natural Resources confirmed that a leopard had been found on the woman's property. Duke said the woman was worried about a recent streak of attacks against cats and dogs in the neighborhood.

"She's got cats that are basically her family," Duke said. "She was trying to protect her babies.”

A panther is like a leopard
Except it hasn't been peppered
Should you behold a panther crouch
Prepare to say "Ouch!"
Better yet, if called by a panther,
Don't anther.