Lots of Critters at the Beach Today 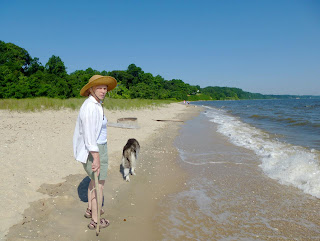 I mean, besides Georgia, Skye, Red and Joel.  A really nice day.  The wind is down from yesterday, and the air is warmer, but we're still not back to the oppressive summer heat and humidity we had before the storms. 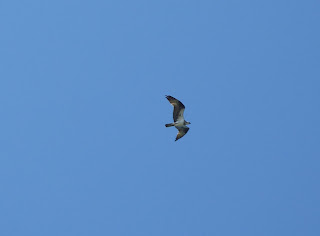 Of course, the Ospreys were out and about. 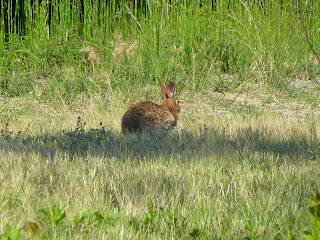 There was a rabbit up eating grass on the old dune, probably an Eastern Cottontail.  Random cottontail fact:


Unlike squirrels and chipmunks that eat sitting up on their hind legs, and can hold food with their front paws while spinning it in circles to devour it quickly, a cottontail eats on all fours; and can only use its nose to move and adjust the position of the food that it places directly in front of its front paws on the ground... The only time a cottontail uses its front paws to enable eating, is when vegetation is above its head on a living plant. The cottontail will lift its paw to bend the branch to bring the food within reach. 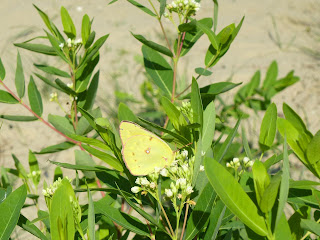 And, of course, there were butterflies in the Milkweed that grows on the dunes.  This is a pretty nice specimen of the common Clouded Sulfur (Colias philodice).  As usual, it was much easier to photograph from the side than the top... 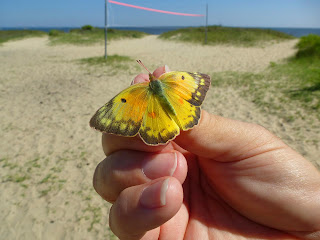 So I resorted to cheating, and grabbed it up, and subjected it to a short photo-shoot before releasing it. 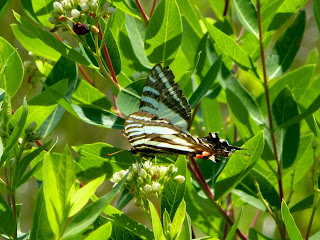 The milkweeds also played host to this Zebra Swallowtail (Eurytides marcellus).  I've noticed that most of the Zebra Swallowtails I've seen early this year seemed small, only a couple of inches long, and this one was no exception to that. 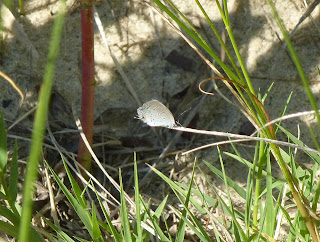 And finally, this little tiny Eastern Tailed Blue (Cupido comyntas).  Again, not very cooperative, but fairly distinctive in the photo.
Posted by Fritz at 2:01 PM