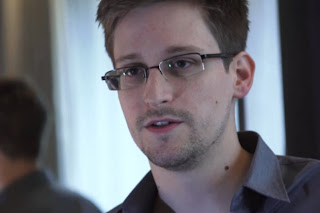 After scooting off to China

A 29-year-old man who says he is a former undercover CIA employee said Sunday that he was the principal source of recent disclosures about ­top-secret National Security Agency programs, exposing himself to possible prosecution in an acknowledgment that had little if any precedent in the long history of U.S. intelligence leaks.

Edward Snowden, a tech specialist who has contracted for the NSA and works for the consulting firm Booz Allen Hamilton, unmasked himself as a source after a string of stories in The Washington Post and the Guardian that detailed previously unknown U.S. surveillance programs. He said he disclosed secret documents in response to what he described as the systematic surveillance of innocent citizens.

OK, I'm not trying to be a primary news source.  I'm just curious.  Is Snowden a hero or a traitor?  I myself am unsure in the matter.

I've assumed for a long time that all electronic communications that flow through the US were scooped up by the NSA for "research."  Simply the huge volume of material, and the directive that they look only for foreign intelligence and terrorism kept them from conducting extensive domestic surveillance.  According to this revelation, the NSA collected less than that, only records of the exchanges, not the contents.  I'll wait for the next shoe to drop.

In the meantime, do we want the NSA doing this?  I would argue no.  The IRS was charged with not biased collection of taxes, and administering tax laws, and, if the administrations most optimistic defense is believed, the government workers involved could not help themselves from favoring the party of big government.  Should we expect better of the NSA employees?

Still, you work for the NSA, you promise to keep their secrets, and hope that your superiors are playing straight, unless you know for sure they're doing something illegal.  Was that threshold crossed?
Posted by Fritz at 10:03 AM