Femen Beards the Lion in His Den 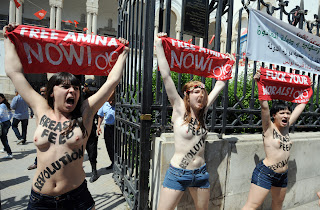 Three young women from the women’s rights group Femen were detained as they staged a topless protest in the Tunisian capital of Tunis – their first public stunt in the Arab world. The spectacle culminated in scuffles outside the capital’s main courthouse, as the group’s one German and two French female members stood by the railings shouting the slogan “Free Amina,” in reference to the young Tunisian woman who was earlier arrested and is hours away from being tried for protesting the policies of hardline Islamists. 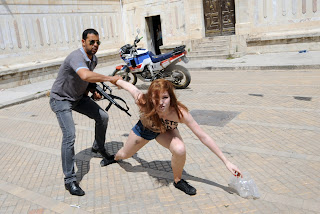 Wearing only skimpy denim shorts, their bodies bearing the inscriptions “Brest Feed Revolution” and “Femen Extremist”, the ladies were quickly snatched up by authorities and taken inside the courthouse, as journalists stood by, observing the scene. 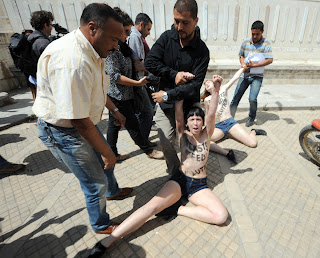 Um, why are they writing the protests signs on the their bodies and banners in English?  I doubt that it's widely spoken in Tunisia.

Tunisia, being a socially conservative country, saw a number of witnesses, including lawyers, try to cover up the young women and attack some of the journalists, claiming they were giving the activists a platform for their antics. Once inside the building, the lawyers followed the police and the women, singing the country’s national anthem and shouting “Get out!” – the words often heard during Tunisia’s own Arab Spring of January 2011.

Six of the journalists (among them one from Reuters and another from France’s Canal+) were also detained, but let go after giving statements about the event.

I have to say, this is really one of the bravest protest that the FEMEN crowd have been involved in.  It's pretty safe to protest the Pope in Italy, Vlad Putin or even Barbie in Germany, my hero Silvio Berlusconi in Italy,  the morons of Davos in Switzerland, or even the Islamic misogynists in Paris.  However, on their home turf the Islamists can pretty nasty; witness the women involved in street protests in Egypt who were routinely subjected to "virginity checks" by authorities, when not outright raped.

Although I only agree with Femen's choice of target a fraction of the time, I think this one is one of their more worthy efforts.  I hope they get out of this with their "lady parts" as intact as before they started.

Wombat-Socho's Rule 5 Sunday at the Other McCain came on Monday this week.
Posted by Fritz at 6:00 AM