Biden "What Planet Is This Guy On?"

ADN America looks around and finds Biden's net approval rating underwater in 45 states, "He is in the red by double digits in most midterms battleground states. . . . The president’s net approval rating is still positive in Vermont, California, Maryland, New York and Massachusetts. " I'm not surprised. At Fox, Biden slammed for claiming 8.2% inflation shows ‘progress’: ‘What planet is this guy on?’ It went from 8.3 to 8.2, until the next revision. Audacy opines Biden's Blunders: the latest and 'greatest'. Da Caller reports Democrats In 4 Key Races Pressed Biden To Defund Border Enforcement Agencies, Grant Mass Amnesty. At Da Wire, To State The Obvious, Biden Is A Remarkably Bad Negotiator And Doesn’t Understand How The World Works. U.S. extends Covid public health emergency even though Biden says pandemic is over (CNBC) even though Biden declared the pandemic 'over ' (Politico). Those "emergency" powers are hard to give up. At Althouse, "President Joe Biden appeared to grab a young girl by her shoulder telling her 'no serious guys till you're 30' while posing for a photograph with the teen and her friends at Irvine Valley College in Irvine, California, on Friday...." The Daily Mail reports. Same old dog. Laura Hollis reminds us Trump Isn't Dangerous; This Administration Is. From the Wombat's In The Mailbox: 10.14.22, EBL: Wait, Why No Impeachment For Biden For Election Interference?

As expected, the Lawfare ideologues have weaponized the legal system to grant special visa status to the illegal aliens flown to Martha’s Vineyard by Florida Governor Ron DeSantis. The aliens have been granted lawful U.S. residency status via “U VISA’s” reserved for victims of crimes.

Their applications as criminally trafficked victims come as the result of Texas Sherriff Javier Salazar certifying they were victims of an illegal human trafficking operation led by the Florida governor. As an outcome, Ron DeSantis is under investigation by federal authorities and Texas authorities for violations of human trafficking laws.

If true, Joe Biden is the worlds biggest human trafficker.  KT calls this DeSantis ad The election cycle's best ad is both heartbreaking and uplifting.

At WaEx, Tulsi Gabbard attacks Democratic hypocrisy for not supporting women. Also at WaEx, Paul Bedard is impressed, Whoa: GOP ‘generic’ lead nearly doubles in week. Looks like a random fluctuation to me. Don't get cocky. At Not The Bee, WATCH: The folks over at MSNBC really have no idea how they're going to live on this earth with Republicans. They really don't know who is supplying the food, water and power, do they?

I’ve got a confession to make. When I saw that Republican Herschel Walker had accepted a debate with Democrat incumbent Sen. Raphael Warnock, I wasn’t exactly enthused. Yes, to some extent, Walker’s communication issues have been overstated, but no one was ever going to confuse him for a charismatic speaker, and certainly, no one thought he would be a good debater.

The running assumption for the month leading up to the event has been simple: Walker would be lucky to get out alive, and absolutely no one was entertaining the possibility that he could excel.

In a shocking twist, though, that’s exactly what Walker did. It wasn’t a perfect performance, but far from bombing, people are actually suggesting that the Republican candidate may have won the debate. That’s a far cry from the predictions of total meltdown being made just prior to showtime.

Also the Blaze reports Dr. Oz hits Fetterman for requiring computer to understand reporter's questions, not being transparent on health. Nicholas Ballasy at JTN, Biden and Fetterman draw questions about fitness for office ahead of joint campaign appearance. KT sees Damage control: Fetterman campaign launches ad discussing his stroke after reactions to NBC interview. From the Wombat's In The Mailbox: 10.14.22, Twitchy, Fetterman’s Wife Says NBC Journo Should “Face Consequences” For Revealing Her Husband The Senate Candidate Is Brain-Damaged and EBL Fetterman and Biden in Pennsylvania.

At AZ Central, No governor's debate. No Lake interview. How PBS botched Katie Hobbs-Kari Lake debate drama. Defund PBS. Haut Hair has the Lamest media fact-check ever? Ryan Laughlin@RyanLaughlinKOB "FACT CHECK: The @GOPGovs just launched this attack ad in New Mexico. While the @GovMLG did release this criminal from prison early and he did kill his ex-girlfriend right after he got out, it did not happen the way the ad portrays." 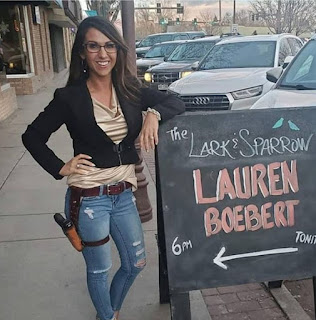 Mediaite, Lauren Boebert’s GOP Primary Opponent Endorses Her Democratic Challenger in Scathing Op-Ed. Give him the 'Cheney' treatment. To oppose Boebert is to vote for Ilhan Omar and AOC to determine policy.

In perhaps the most disgusting happening of the current campaign, Dave Strom at Haut Hair Jerry Nadler opponent publishes sex tape. No, not Nadler's; his own! City and State NY, Manhattan congressional candidate publishes a porn video to highlight his sex positive platform, "Mike Itkis is running against Rep. Jerry Nadler, and wants to legalize sex work." Althouse, "In a grunt for attention, third-party Congressional candidate Mike Itkis has released a sex tape to highlight his sex positive campaign platform...."  "I'm not going to look at his "sex tape" but I see the photograph at the link and suspect that there's not much to see in the video. The mere idea of making a "sex tape" is supposed — correctly — to be enough to get our attention." Anything is better than Nadler.

They don’t outright say it, but the thrust of the initiative is clear: to name and shame the “pollsters and news organizations” who are skewing the results and getting disproportionate attention for misleading results. They aren’t naming names yet, but they are promising to do so.

Many of us on the right have been struck by how misleading the polling is in important races–always skewing in favor of the Democrats. Remember when Hillary had a 99% chance of winning the presidency just before she lost?

Well, this will all be fading in our rearview mirror soon enough. Anyone who looks at the poll numbers can see that Democrats are going to get wiped out in the midterms, and the proceedings of the J6 Committee will be remembered as symptomatic of Orange Man Bad Syndrome.

All we have to do is Keep Calm and Vote Republican.

John Solomon at JTN, sees a possible Jan. 6 panel boomerang: Final hearing undercuts two key Democrat talking points "Video played during the final committee hearing showed Pelosi firmly in charge of a security apparatus she claimed didn't report to her." Twitchy, ‘NOT normal’: Nancy Pelosi just HAPPENED to be mic’d up with a camera crew on Jan 6 … and WTF, is that Ray Epps?! (watch). ADN America, Pelosi told aides on Jan. 6 she would "punch out" Trump if he came to U.S. Capitol, "The video clip depicts the House Speaker in her office watching Trump give his “Save America” speech to supporters on the National Mall in Washington, while pledging to never concede the 2020 election." Newsbusters, The 1/6 Pelosi Publicists Have Barely Noticed the John Durham Probe. Also at JTN, Trump calls J6 panel 'total BUST,' toys with complying with subpoena to testify. From WaEx, Trump responds to final Jan. 6 hearing, calling committee ‘highly partisan political Hacks and Thugs.’  and J6 House Committee won’t subpoena former Vice President Mike Pence. 1945 Subpoena Donald Trump? His Testimony Would Make Democrats Pay. From the Wombat's In The Mailbox: 10.14.22, at Am Great the redoubtable Julie Kelly writes of The Broken Promises of the January 6 Committee, "Questions about the role of the FBI and other prominent government agencies in the events of January 6, 2020 remain unanswered because they were not asked." They know the answers, and they're not helpful to their narrative.

Judge Anthony Trenga’s decision to dismiss one of the criminal counts came down to what the definition of the word “talked” is.

Durham’s indictment against the Russian-born Danchenko argued that he “stated falsely that he had never communicated with” longtime Clinton ally Charles Dolan “about any allegations contained” in the dossier, while “in truth and in fact, and as Danchenko well knew, Danchenko sourced one or more specific allegations” in the dossier anonymously to Dolan.

During an interview with the FBI, Danchenko’s handling agent, Kevin Helson, had asked Danchenko: “But you had never talked to [Dolan] about anything that showed up in the dossier right?”

The defendant had replied, “No.” The agent followed up, “You don't think so?” Danchenko replied, “No. We talked about, you know, related issues perhaps but no, no, no, nothing specific."

Danchenko’s defense attorneys have argued that their client's answer was “literally true.”