Biden Underwater Everywhere Even Saudi Arabia, Hunter on the Ledge? 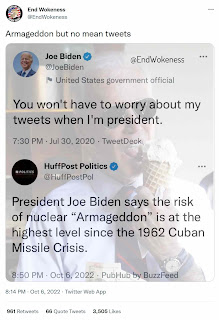 At WaEx, Paul Bedard reports Biden below 50% approval on every top 10 issue, so, what is he doing right? The NYPo Ed Board says Team Biden’s bizarre dodges on Delaware visitor logs make the president look guilty as hell. Matt Margolis Biden Politicizes Visit to Hurricane-Ravaged Florida. Climate change, like they never had hurricanes before they had SUVs. Virginia Kruta at Da Wire hears the President Delivers Spicy Remark Via Hot Mic In Florida: ‘No One F***s With A Biden’ but the Wa Free Bee identifies 9 Times Someone ‘F—d With a Biden’ and Got Away With It, "Fact check: Sleepy Joe caught in another blatant lie." At WUWT, The Saudis Snub Biden Again. Insty at NYPo, Biden hates Republicans so much, he would rather give oil money to Venezuela and Saudi Arabia than Texas.  Via the Wombat's In The Mailbox: 10.06.22 (Evening Edition) at LI, Mary Chastain say the Anti-Fossil Fuel Biden Admin in Midterm Elections Panic as OPEC Cuts Production.  At Front Page, Wayne Allen Root calls Biden  A Figurative Suicide Bomber, "The real forces behind the puppet." Ed Driscoll at Insty, LISTEN, SUG, DON’T FORGET TO SAY YOUR PRAYERS: US splashes $290m on anti-radiation drugs after Putin ups nuclear threat. At Am Great the great VDH worries about An Epidemic of Cognitive Impairment. "Why is the supposed party of youth dominated by such frail and forgetful elderly?"
From the Wombat's In The Mailbox: 10.06.22 (Afternoon Edition), the Weasel Zippers send Kamala Harris AGAIN Describes Her “Love” For Venn Diagrams: “You Know, The Three Circles?”, Biden: “I Was Sort of Raised In The Puerto Rican Community”, Former Biden Family Business Partner: The Bidens Expected “Billions” From Chinese Business Dealings, and Google Sent 22 Million GOP Emails To Spam Box In Just 6 Days


Da Lid, claims It’s Not Over: Tony Bobulinski Accuses Biden Inc. Of Fraud — Brings The Receipts.  NYPo reports Federal agents have evidence to charge Hunter Biden. At Fox, Tony Bobulinski reveals details on Hunter Biden business dealings in exclusive interview with Tucker Carlson. From the Wombat's In The Mailbox: 10.06.22 (Afternoon Edition), Nice Deb at AM Great cites Tony Bobulinski: Biden Clan ‘Stole’ Millions ‘From Me and My Other Partners,’ FBI Ignored Multiple Felonies.WaPoo whines Federal agents see chargeable tax, gun-purchase case against Hunter Biden. "Asked about the case, Chris Clark, a lawyer for Hunter Biden, accused investigators of leaking information. “It is a federal felony for a federal agent to leak information about a Grand Jury investigation such as this one,” Clark said in a written statement. "Any agent you cite as a source in your article apparently has committed such a felony. We expect the Department of Justice will diligently investigate and prosecute such bad actors." I have no doubt they will, far more diligently than any leaks against Trump.

From ADN America hears Trump to Latino leadership conference: "With the help of Hispanic Americans we will get our country back". Breitbart reports a Survey: Ron DeSantis Sees Double-Digit Lead Among Latino Voters. Rusty Weiss at the PI, has a Poll that Shows Conservative Latinos With a Massive Swing Toward Republicans.

Jeff Anderson at Am Great provides Three Views on the Election, "A collection of competitive Senate races will make for interesting viewing on the night of November 8. Three leading pollsters provide keys." Mary Chastain at LI sends Cook Political Report Flips Pennsylvania Senate Race Back to Toss Up, "Dr. Mehmet Oz is closing in on John Fetterman. No matter who wins, the race will be closer than people thought." Nick Arama at Red State demonstrates how brain-damaged Fetterman Can't Control His Confusion in New Remarks. WaPoo crows about GOP crisis in Herschel Walker race was nearly two years in the making, "In Georgia, Republicans are stuck with a problematic Senate candidate they saw coming but decided they couldn’t stop." Jim Antle at WaEx, Five reasons Herschel Walker could survive bombshell abortion allegations. At Twitcy, Matthew Foldi does the Walker-obsessed MSM’s job for them and airs out Raphael Warnock’s own truckload of dirty laundry. So do Georgians prefer wife beater or a guy who paid for a girlfriends abortion? Stay tuned.

Cam Edwards at Bearing Arms sees a Shock poll that shows Hochul, James in trouble in New York. But are they past the margin of fraud? Ace, Polls: Zeldin Statistically Tied with Hochul, Tiffany Smiley Statistically Tied with Absolute Cretin Patty Murray for Washington Senator.  'Bonchie' at Red State details how Blake Masters Decimates Mark Kelly at Debate, Libertarian Candidate Goes Full Libertarian. At PM, Nebraska GOP Senator Ben Sasse to resign, "The Tampa Bay Times reports that the University of Florida considers Sasse to be "the lone finalist to be the school's next president."  Successor to be appointed by Republican governor. Ace is heartbroken in red type,  Useless Gasbag Self-Promoting Half-Democrat Ben Sasse Resigning From The Senate Seat He Was Just Re-Elected To in 2020

Henry Rogers at Da Caller reports how a Hispanic Moderator Stumps Arizona Dem Gov Candidate Katie Hobbs On One ‘Specific’ Lesson Learned From Hispanic Community. Breakfast tacos? KT at Haut Hair on how Hmm. Dem Rep. Cuellar receives new big donors who primarily contribute to Republican candidates, who prefer at conservative Dem to a Trumpist. "Garcia has the chance to flip the district to Republican, as Mayra Flores did in Texas’s 34th congressional district. Corporate PACs may be contributing to Cuellar because he is a safe politician to donate to and the PACs can be seen as donating in a bipartisan manner." At WaEx, Lauren Boebert virtually tied with Democratic challenger in reelection bid. At Sm Great Gavin Wax thinks Matt Gaetz Emerges From Faux ‘Scandal’ as Model America First Leader. Beege Wellborn, one of the new guys at Haut Hair Lost in all the big name mid-term brouhaha: VA-10 and Hung Cao. A Vietnamese refugee, retired US Navy captain running as a Republican.

Q: Do you believe @JoeBiden is the elected president?@HungCaoCongress:

“JoeBiden is the @POTUS … if you don’t believe me, go to your gas ⛽️ pump or go to your grocery stores and that’ll tell you who is.” pic.twitter.com/xj0QIsO9js

At LI Mary Chastain reports the 11th Circuit Court Expedites DOJ’s Appeal of Special Master Appointed to Review Trump Documents. At WaEx Ryan King claims a Freak accidental court posting offers further details about Mar-a-Lago documents. "Nestled in the trove of documents snatched from Mar-a-Lago in August was a slew of personal materials, such as healthcare documents, tax forms, retainer agreements for lawyers, and more, according to a report. The revelation comes from logs drafted by the Justice Department that were ordered sealed by a judge but inadvertently posted on the public court docket, shedding light on what was confiscated from the Palm Beach resort. The logs are no longer visible to the public but were caught by Bloomberg News." The FBI was obviously being very careful /sarc.

WaT claims Trump botched DOJ appointments; Biden is relishing his. "How to build a partisan juggernaut." Biden has more like minded people to choose from. Jerry Dunleavy at WaEx reports FBI whistleblowers say Hundreds of agents have resigned to escape sexual misconduct allegations. Power corrupts, great power corrupts greatly. Bob Spencer at PJ Media, You Knew the FBI Was Corrupt, But Did You Know It Was THIS Bad? Yes. At Da Wire, More Pro-Life Activists Targeted By FBI. Rick Moran at PJ Media, FBI Escalates Its War on Anti-Abortion Protesters. Also at PJ Media, Stephen Kruiser notes Hunter Biden Is Free but the FBI Is Rounding Up Pro-Lifers and wonders Can a Republican Majority Rein in the Lawless DOJ? First things first, win the majority.