Alaska Has a Crab Problem 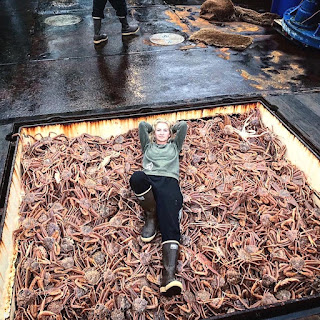 
The media is abuzz this week with stories related to the first-ever cancellation of Alaska’s Snow Crab season for 2022. Media outlets like Bloomberg are wrongly attributing the decline in snow crabs to climate change, citing nothing more than opinions offered by favored experts. This is false. The evidence indicates other factors have led to a steep decline in snow crab populations.

Alaskan officials recently canceled the Bering Sea snow crab season for the first time ever after scientists discovered an unprecedented decline in crab numbers. Climate change is the number one suspect in the dropoff. (emphasis mine).

“We’re still trying to figure it out, but certainly there’s very clear signs of the role of climate change in the collapse,” said Michael Litzow, shellfish assessment program manager at the National Oceanic and Atmospheric Administration (NOAA), which runs an annual survey of Bering Sea snow crab numbers. (Snow crabs are also found in the Beaufort and Chukchi seas off Alaska.)

In reality, the climate change link is nothing more than an opinion.

Another story, sourced from the Alaska Journal of Commerce, republished in the Anchorage Daily News (ADN) by Elizabeth Earl, also blames climate change for the crab decline: Scientists point to climate change as likely cause for Alaska snow crab decline. Saying: “There’s no complete consensus about why the stock crashed in the first place. Increasingly, however, the models seem to indicate that it’s due to temperature increases linked to climate change.”

No consensus, but let’s trust computer models over actual data. Where have we heard that before? As Climate Realism has repeatedly discussed, here and here, for example, climate models for air temperature are seriously flawed making projections that are far higher than recorded temperatures. There’s no reason to believe sea temperature models would be any better.

Multiple factors are contributing to snow crab decline. Long-term climate change is not prominent among them.

Fortunately, not every media outlet is as gullible as Bloomberg or ADN, appropriately attributing the snow crab decline to those other factors like predation, overfishing, and naturally warming waters.

The Guardian, for example, which is almost always blames climate change for anything bad that happens, noted in their story, Alaska cancels snow crab season over population decline (emphasis mine):

“Causes being researched but likely included increased predation and stresses from warmer water.”

No mention of “climate change” by the Guardian. We’ll return to the “warmer water” issue later in this article.

Back in 2017, when crab populations first started declining, The New York Times (NYT) had this to say in China’s Appetite Pushes Fisheries to the Brink.

Overfishing is depleting oceans across the globe, with 90 percent of the world’s fisheries fully exploited or facing collapse, according to the United Nations Food and Agriculture Organization. From Russian king crab fishermen in the west Bering Sea to Mexican ships that poach red snapper off the coast of Florida, unsustainable fishing practices threaten the well-being of millions of people in the developing world who depend on the sea for income and food, experts say.

Surprisingly, the World Wildlife Fund (WWF) echoed that point in the story, “Illegal Fishing Puts Crab Populations at Risk,” noting “A new WWF study has revealed populations of crab in the Russian Far East are at risk of collapse due to overharvest from illegal fishing.”

In October, the National Marine Fisheries Service determined that with its current low numbers, the stock of Bering Sea snow crab — also known as opilio crab — is officially overfished.

While so-called experts that have the ear of low-information journalists blame warmer water on climate change, that isn’t true. Rather, an extended La Nina event has increased temperatures in the seas inhabited by snow crabs.

La Niña is part of the natural climate pattern known as El Niño Southern Oscillation, a scientific term that describes the oscillating temperature changes between the ocean and atmosphere in the Equatorial Pacific. La Niña is known as the cold phase while El Niño is known as the warm phase. 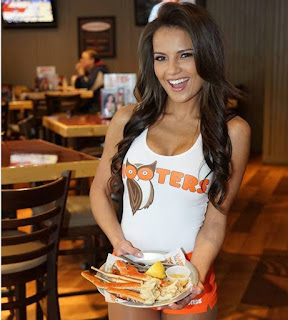 The downside of this particular and ongoing La Niña ocean pattern is that it is affecting the Bering Sea, changing ocean currents so that warmer water is pushed northward.

These El Niño and La Niña events are natural patterns that have been going on for millions of years.

The United Nations Office for Coordination of Humanitarian Affairs (OCHA) has a page on the issue which factually reports El Niño and La Niña ocean patterns are entirely natural. The U.N. reports humans have no impact on them, stating:

No. El Niño events are not caused by climate change – they are a natural reoccurring phenomenon that have been occurring for thousands of years.

Can we prevent El Niño and La Niña from occurring?

No, El Niño and La Niña are naturally occurring climate patterns and humans have no direct ability to influence their onset, intensity or duration.

Crab population crashes have happened before, well before climate change became a cause du jour in the media. Note this graphic from the National Oceanic and Atmospheric Administration showing Bering Sea crab populations back to 1980 (Figure 2, below). 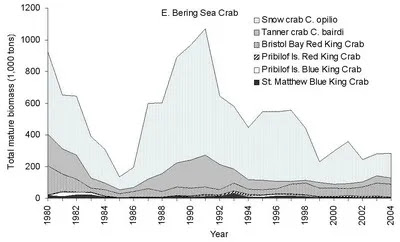 According to the data in Figure 2, in 1985, the Bering Sea crab population crashed.

The evidence clearly demonstrates that the current large crash of the Bering Sea crab population is due to combination of overfishing and the largest La Niña event in a decade. One doesn’t have to be a scientist to understand this.

The first thing you need to do it immediately be skeptical about any narrative the media is pushing on you. Crab populations are well known to be highly variable from year to year, but it's important, that when bad years occur, that you don't exacerbate the problem by a blind insistence on maintaining former high catch levels.
The Wombat has Rule 5 Sunday: HMS Eskimo awaiting your digital pleasure at The Other McCain.
Posted by Fritz at 7:17 PM