Just as the NY Times Suddenly Discovers that Biden Is a Liar (Steve Hayward at Power Line), Senile Joe uncorks a new one, Joe Biden Claims His Son Beau Died In Iraq (Virginia Kruta at Da Wire). Beau died of glioblastoma in the US. For political reasons, Biden would like to claim the cause is burn pits in Iraq, but Beau was a lawyer; I doubt he ever even smelled a burn pit. At Summit News, Videos: Biden Gibbers, Drops Cheat Cards, Declares There Is No Recession, and, no doubt, he'll keep changing the definition (at least in his own mind) to make that true. From the Wombat's In The Mailbox: 10.12.22,  Liz Shield  at Am Great reports Joe Claims Hunter Is ‘on the Straight and Narrow.’ Possibly, but you never really know, do you?

Tom Klingestein at Am Mind takes A Phone Call from President Trump. At Front Page, Wayne Allen Root writes How Different Would America Be Today if Trump Were Still President? "The easiest column I've ever written."

At Am Great Ned Ryun thinks Things Are Much Worse Than They Seem for Democrats "Don’t believe the psy-ops polls: Democrats are in for a shellacking unlike any they’ve had in a long while."

From Dave Marcus at NYPo, Mayorkas must go: He smeared border agents despite knowing they hadn’t whipped migrants. At NR, DHS Secretary Mayorkas Was Informed ‘Whipping’ Incident Was Bogus Hours Before He Condemned Border Patrol Agents. I'll give him a pass on the two hour gap between when he was notified, and when he came out against the agents. I don't always read my email every two hour, and didn't when I worked. But his subsequent double down is a fireable offense. At Da Caller, Dems’ Favorite Scholar Ruy Teixeira Predicted Nevada Would Turn Deep Blue. Now He’s Changed His Tune. Mark Krikorian at Am Great Is a Hispanic Red Wave Coming?. Not likely, but the numbers that have moved red are distinctly disconcerting to Democrats, and immigration policy is a large part of that.

Now where was I before I was interrupted. Oh yeah, at PJ Media, Stephen Kruiser warns Don't Hold Your Breath Waiting for Tulsi Gabbard to Join the GOP. I won't, but at least her craziness is less severe than most. But KT at Haut Hair hears It begins - Tulsi Gabbard to campaign for Bolduc in New Hampshire.

Tulsi Gabbard will campaign for retired Army Brig. Gen. Don Bolduc in New Hampshire, according to an announcement made by his campaign Wednesday. Bolduc has the support of Trump, though not an official endorsement, which helped him win the GOP primary to become the candidate to challenge incumbent Democrat Senator Maggie Hassan. . .

“We don’t agree on every issue, but I am honored to have the support of Tulsi Gabbard who shares my view that the status quo is broken, and we need a change of direction,” Bolduc said in a statement.

“Tulsi is a fellow change agent and independent-minded outsider willing to speak truth to power. I am going to spend every day between now and election day building a wide coalition of supporters that includes Republicans, independents and even disaffected Democrats who know that Senator Hassan is a career politician and must be retired.”

From the Wombat's In The Mailbox: 10.12.22, The Weasel Zippers, Tulsi Gabbard To Campaign For GOP Senate Candidate After Leaving Democratic Party…, "The anti-Liz Cheney?" and at Am Think, G. Murphy Donovan  has A Take on Trump and Tulsi.

Kurt Schlichter at Town Hall, Instead of a National Divorce, How About a National Backlash?. Isn't that what Democrats call elections they lose? Also from Town Hall, Ann Coulter says For More Crime, Vote Democrat!. Eddie Scary at Da Fed on The Left’s Funny New Lie: It’s The ‘Red States’ With More Crime!; but the blue cities in the red states.

Cutie Pavlich reports MSNBC Reveals Just How Bad John Fetterman's Health Really Is. AP, NBC reporter’s comment about Fetterman draws criticism. Capt. Ed at Hair cites the NBC reporter: None of the 'journalists' criticizing my Fetterman observations have been in the same room with him. David Harsanyi at Da Fed thinks The Left’s Fetterman Talking Points Need A Lot Of Work. "It's Not Ableist To Wonder If Fetterman Can Do His Job." At Da Wire, Trafalgar Founder On Poll Indicating PA Senate Race Tightening: ‘People’ Starting ‘To Pay Attention.’

Beege Wellborn at Haut Hair is In it to win it: McCarthy's Congressional Pac writing checks for a majority to cash, "As much as I worry about Kevin McCarthy’s morphing into a Paul Ryan-ish squish if he ever takes the Speaker’s gavel in hand, I’ve got to give it to him now – he is going hell-bent for leather to win the majority in Congress back for the GOP." At Da Caller, white liberal CNN Contributor Paul Begala Claims ‘White Liberals’ Aren’t ‘Real Democrats.’  Cathy Salgado at PJ Media reports a Journalist Called Child Protective Services on State Senate Candidate—for Celebrating Columbus Day with Her Daughter. For some reason, CNS News reports a Gallup poll, Trust in Govt Continues to Falter, Less Than 50% 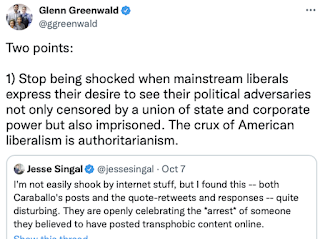 From Aaron Kliegman at JTN, Seven times 'disinformation' turned out to be just the opposite, "From Hunter Biden's laptop to the origins of COVID-19, numerous contentious claims deemed false and misleading by elites have since proven legitimate." Insty HE’S RIGHT, OF COURSE: ->

At Da Caller, Facebook ‘Whistleblower’ Teams Up With Ex-Feds, Left-Wing Billionaire To Police Social Media. From Front Page, PayPal Did NOT Back Down, STILL Threatens $2,500 Fines for Promoting ‘Hate’ and ‘Intolerance’ "Make no mistake: PayPal is not alone in this. They’re just out front." "Promoting hate and intolerance" = opposing the leftist agenda.