The Maryland Department of Natural Resources announced results of this year’s juvenile striped bass survey, which tracks the reproductive success of the iconic fish in the Chesapeake Bay. The 2022 young-of-year index is 3.6, which is slightly higher than last year’s result, but remains below the long-term average of 11.3.

The Atlantic coastal striped bass population has decreased in size, but is still capable of strong reproduction with the right environmental conditions. Variable spawning success is a well-known characteristic of the species. Biologists continue to examine factors that might limit spawning success.

Biologists captured more than 40,000 fish of 58 different species during the 3-month survey. One positive result was the increased abundance of spot, a popular species used for food and bait. Spot abundance was the highest observed in over a decade. 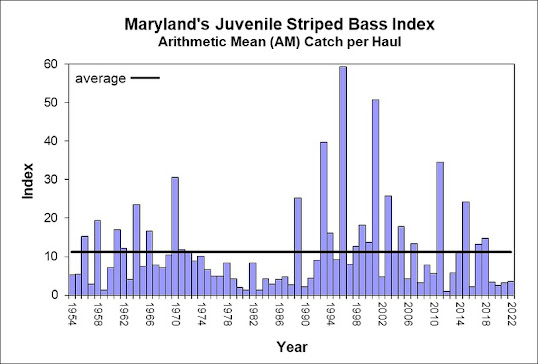 So another year with Maryland's Striped Bass recruitment being just awful. Another year or two ahead of mining the existing Striped Bass population, unless a moratorium is imposed.

Virginia also reported its YOY results for the year, and while they were not quite as horrible, they don't promise an early end to the Striped Bass problem in the Bay, Juvenile striped bass abundance remains steady in Virginia waters. 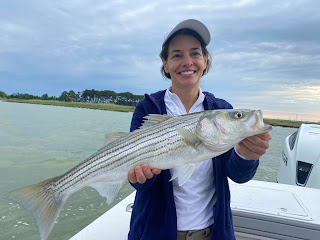 Preliminary results from an ongoing long-term survey conducted by researchers at the Virginia Institute of Marine Science suggest another average year class of young-of-year striped bass was produced in Virginia tributaries of the Chesapeake Bay in 2022. The 2022 year class represents the group of fish hatched this spring that will grow to fishable sizes in three to four years.

The VIMS Juvenile Striped Bass Seine Survey recorded a mean value of 7.95 fish per seine haul in the Virginia portion of the Chesapeake Bay; this value is called a recruitment index by scientists. The 2022 value is similar to the historic average of 7.77 fish per seine haul and represents the 10th consecutive year of average or above-average recruitment in Virginia waters. Although there can be considerable variation in striped bass recruitment among years, the indices observed in recent years suggest that abundance of juvenile striped bass in Virginia has been relatively stable. 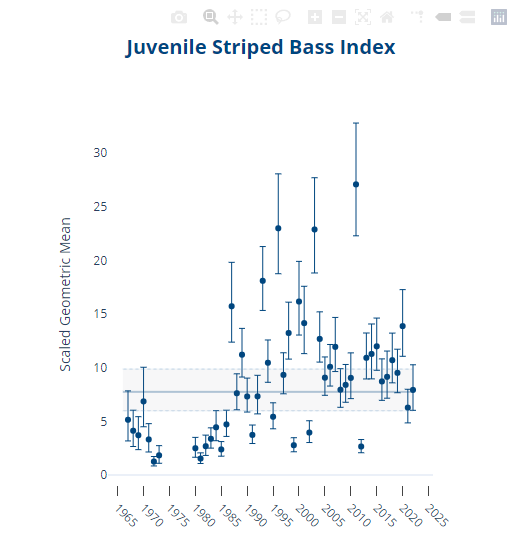 At this point, average is better than below average, but really insufficient to build up the population.