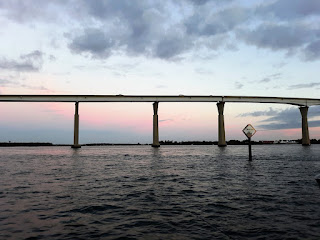 I met Pete and Mike down at the boat at 6:30 AM, and we head out of Solomons. The wind was snotty, 20-30 kts out in the Bay, so Pete opted to try the Patuxent River. Our first stop was the bridge, where we plugged a shoal, and then jigged a couple of pilings. Mike managed a nice striper off one of the pilings, but other than that, it was just a nice boat ride. 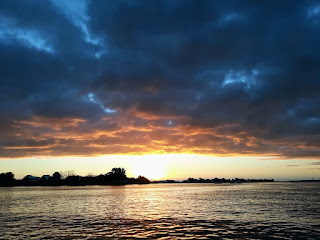 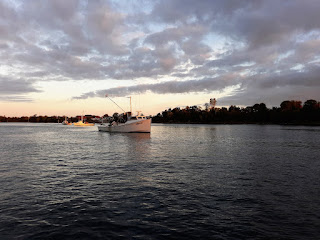 There was a small fleet of oystermen working the shallow water near by. 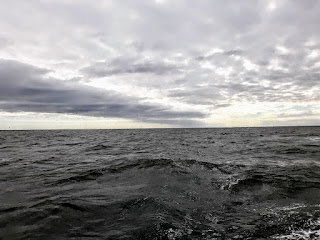 We covered a lot of water for very few fish, until, in the late morning, with the wind down a bit, we tried out near the mouth of the Patuxent, where, while we were trying to jig the three legged piling that marks the mouth, I spotted a large bunch of birds working over fish a little farther out. You can see them, a bit spread out, if you enlarge this photo. 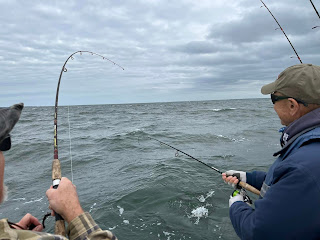 Good quality fish were thick under the birds, you could get an instant hookup if you made it to the bottom, but by the time you fought and landed the fish, the birds and fish had moved further out. In an hour, we moved 2 miles following the schools of fish. 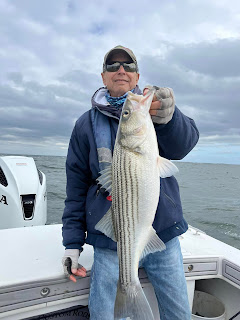 Mike with one out the the school. 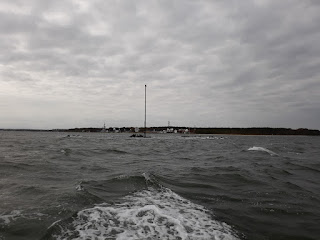 As the birds spread out and stopped working we tried the rocks and shoreline at Cedar point, where Mike caught just a single. We then tried a secret rock pile Pete know along the Pax River Naval Air Station on the way back, where I caught the biggest fish of the day on a crank bait. 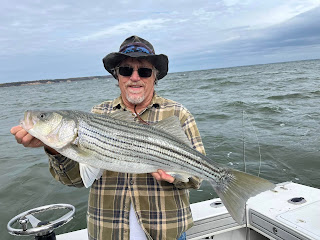