From the Wombat's In The Mailbox: 10.21.22 (Afternoon Edition) Don Surber  read NYT: “Red October is here.”At Election Betting Odds, Republicans for Senate control, 63.5%, House control 88.9%. John Sexton at Haut Hair finds a Poll that finds GOP has 6-point advantage in battleground states. Matt Margolis at PJ Media says I'd Definitely Panic Now if I Were a Democrat. Althouse, Nate Silver: "Why I'm Telling My Friends That The Senate Is A Toss-Up.",  "And we're all his friends at FiveThirtyEight, here," also, David Brooks says, "The Trumpified G.O.P. deserves to be a marginalized and disgraced force in American life. But I’ve been watching..." "From "Why Republicans Are Surging" (NYT)."  At Twon Hall Guy Benson considers the possibility Is the Bottom Completely Falling Out for Democrats? Insty finds DEMOCRATS IN THE BUNKER. "As they say at Sen Blutarsky’s old fraternity, “I think that this situation absolutely requires a really futile and stupid gesture be done on somebody’s part. And we’re just the guys to do it.”" Ace has his own Election Roundup. "A McLaughlin Poll puts the GOP up by 4. An Emmerson College poll puts the GOP up by five, and also says that Biden's approval rating has collapsed, falling ten net points in a month. Republicans now lead 46-41 on the congressional generic ballot, nationally. Last month, according to Emmerson, it was tied 45-45. Biden's job approval was supposed 45-49 last month, or net -4. Now it's collapsed to 39-53, net -14." Joe Biden, via ABC via Haut Hair, Come on, man. ABC News@ABC "NEW: Pres. Biden says midterm polls "have been all over the place." "I think that we're going to see one more shift back to our side in the closing days." https://abcn.ws/3glRX1f"

VodkaPundit at PJ Media, Joe Biden and the Terrible, Horrible, No Good, Sort-Of Press Conference. Ace, in red, italic font with the flaming skull with a crack pipe, Chuck Grassley: Joe Biden Was Paid $6 Million by the Chinese While Vice President, With Actual Payout Delayed Until He Was Out-of-Office to Conceal The Fact He Took Money From a Hostile Communist Regime While Veep. "The allegation is that the payment was delayed to not actually be transferred until he was out of office, so that he wouldn't look like -- what's the word? -- a traitor taking payoffs from a hostile foreign communist regime."  Impeachable.  At Da Wire, Hunter Biden’s Laptop Documents At Least 459 Legal Violations, Watchdog Group Says. But, via the Wombat's In The Mailbox: 10.21.22 (Afternoon Edition), from JB Shurk at Am Think, Trump Embarrasses the ‘Elites’. Twitchy, To sniff or not to sniff? Joe Biden meets with Dylan Mulvaney, trans activist, at the White House.

Insty again, THIS IS THE BEST THE DEMOCRATS COULD DO IN THE STATE OF PENNSYLVANIA? John Fetterman Looks Bad in Suit, Analysis Finds: Bizarre fashion choice raises questions about stroke victim’s ability to dress himself. "Fetterman’s campaign, probably: Hey, he’s every bit as mentally fit as the President of the United States!" Via the Wombat's In The Mailbox: 10.21.22 (Afternoon Edition), Twitchy Alrighty, Uncle Fester John Fetterman DRAGGED for comparing murderers he voted to release to Morgan Freeman!  and LI, Pennsylvania? It Could be Nevada That Flips the Senate and Give Republicans Control.

Also Via the Wombat's In The Mailbox: 10.21.22 (Afternoon Edition),  Don Surber: Democrats’ Kari Lake mistake, theVictory Girls: Tina Kotek Is The Original Defund The Police Candidate and The Geller Reports Nike Co-Founder Phil Knight Declares War on Democrats in Oregon, Kari Lake Thrashes Media, Brings the Receipts When Confronted on ‘Election Denial’, and RINO Former RNC Chief Michael Steele Calls MAGA Republicans ‘Lice,’ ‘Fleas’ and ‘Blood-Sucking Ticks’, and EBL: Can Lee Zeldin win in New York State?. Capt. Ed, UT-Texas Trib: Abbott soaring over Dem "closer" Beto by double digits. Matt Vespa at Haut Hair VIP wonders Will we ever be spared of Mitt Romney's incessant habit of stabbing the GOP in the back? Not until he gets "Cheneyed" and then he'll stab us in the front at least.

In the closely-watched elections in Georgia, where Stacey Abrams would never, ever even consider questioning the results of an election, the Associated Press has caught Georgia Republicans plotting a sneaky trick to ensure their victory in the Senate and gubernatorial races. So what is this diabolical plan and how do they propose to pull it off? Republican leaders around the state have been putting the word out to their voters that they should wait and vote in person on election day. For those who have received mail-in ballots, they advise them to fill out the ballots but hold onto them and go submit them in person at their polling place on November 8th. This cunningly devious plan is intended to make it harder for any mysterious boxes of Democratic ballots to magically “show up” at the last minute (perhaps in the trunk of someone’s car) and tip the scales in their favor. You can almost see Boris Badenov’s fingerprints all over this scheme.

Also Via the Wombat's In The Mailbox: 10.21.22 (Afternoon Edition), Shawn Fleetwood at Da Fed, Democrats Are Already Telling Americans To Expect Delayed Election Results This Fall

At Da Mail, Steve Bannon gets FOUR MONTHS in federal prison for defying January 6 subpoena: Defiant Trump advisor leaves court and tears into Biden's 'illegitimate regime', Nancy Pelosi and Liz Cheney - and says November 8 will be their 'judgment day'. Free pending appeal. Ace, Partisan Judge Sentences Steve Bannon to Four Months in Jail for Refusing to Comply With Congressional Subpoena "How many months in jail did Eric Holder get, again, for refusing to comply with Congressional subpeonas? Zero, right?" At Am Think Patty McCarthy thinks No longer a ‘two-tiered’ system, there is no justice in America. Insty, from his gig at NYPo, After the Jan. 6 Committee finishes, maybe a GOP Congress can probe some actual ‘threats to democracy’. Althouse, "In the most basic sense, any legal arguments seeking to get Mr. Trump off the hook would merely need to be weighty enough to produce two and a half months of litigation."

"If Republicans pick up enough seats in the midterm elections to take over the House in January, as polls suggest is likely, they are virtually certain to shut down the Jan. 6 committee, a move that would invalidate the subpoena."

From "Trump Could Harness Unresolved Legal Issues to Resist Jan. 6 Panel’s Subpoena/If the ex-president turns down the drama of testifying, his legal team could mount several constitutional and procedural arguments in court" (NYT).

Sharyl Attkisson, Republicans ask whether Nat'l Archives colluded with Democrats. A near certainty. 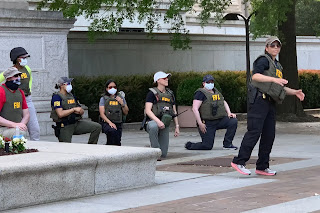 At NYPo James Gagliano reports The FBI Agents Association rewarded agents who took a knee in front of BLM, proving the rot isn’t just at the top. Scott McKay at Am Spec has a  A Primer on Weaponized Governmental Failure:  "Democrats rule over a ruin, but they rule." Matt Margolis at PJ Media reports a Former FBI Official Will Testify About White House Pressure to Inflate Domestic Extremism Numbers. Proving the FBI has no soul, at Am Great Lloyd Billingsley reports on how the FBI investigated Aretha Franklin, FBI vs. Aretha Franklin, et al. "After all these years, the bureau still targets the innocent."
Miranda Devine at NYPo notes It’s been two years since 51 intelligence agents interfered with an election — they still won’t apologize. Margot Cleveland at Da Fed, Media Shame Durham After Danchenko Verdict, But It’s Russia Hoaxers Who Should Be Embarrassed. David Strom at Haut Hair, Elon Musk says "vote Republican," suddenly being investigated as a national security threat. The redoubtable Julie Kelly at Am Great fingers Elvis Chan: Cyber Conduit Between FBI and Big Tech,
"This FBI agent based in the Silicon Valley and working with social media companies to censor what you see on their platforms has a long history of blocking and tackling for his Democratic bosses."
A truly concerning case, from Insty, BIDEN’S GESTAPO: FBI Raids Star ABC News Producer’s Home: Emmy-winning producer James Gordon Meek had his home raided by the FBI. His colleagues say they haven’t seen him since.

“Meek has been charged with no crime. But independent observers believe the raid is among the first — and quite possibly, the first — to be carried out on a journalist by the Biden administration. A federal magistrate judge in the Virginia Eastern District Court signed off on the search warrant the day before the raid. If the raid was for Meek’s records, U.S. Deputy Attorney General Lisa Monaco would have had to give her blessing; a new policy enacted last year prohibits federal prosecutors from seizing journalists’ documents. Any exception requires the deputy AG’s approval.”

More from Jennifer O'Connell at Red State, The FBI Raid and Disappearance of Journalist James Gordon Meek Should Chill You to the Bone. "The fact that Meek has disappeared is more disturbing than the fact that he was raided. A missing journalist is the stuff of the former Soviet Union and present Iranian governments. With our constitutional free speech protections, American journalists should not have to fear government retaliation or reprisal on any level. . . . But, this is now Biden’s America."