We're still discussing Sleep Joe's attempt to scare the bejeezus out of the American public with the prospect of nuclear war. At the Right Scoop, White House walks back Biden saying we are on the brink of nuclear war… ABC, Biden's warning of nuclear 'Armageddon' reflects the 'stakes' with Russia, not an imminent threat: Kirby. At Mediaite, ‘What’s Biden Talking About?’ Tapper Confronts Dem Senator on President’s ‘Stunning’ Nuclear Armageddon Warning. Eddy Scary at Da Fed points out It’s Biden Threatening Nuclear Armageddon After Six Years of Media Freakout Over Trump Tweets. Not the guy I want "in charge" if a nuclear holocaust looms. But then, I didn't vote for him. Frank Schell at Am Spec points to All the President’s Disconnects, "The best that can be said about him is that he’s consistently wrong."

Matt Margolis at PJ Media say They've Completely Lost It: Biden White House Claims GOP 'Attempted to Defund the Police'. They haven't lost it; it's a deliberate attempt to divert attention from the effects of their policies. At Da Wire, Democrat Rep. Calls For ‘New Blood’ In Her Party When Asked If She Would Support Biden’s Re-Election, Slotkin. At the Wa Free Bee, Biden’s Day One Actions Haunt Him Still, "Column: The president blunders from one self-inflicted crisis to the next." Beege Wellborn at Haut Hair notes that even SNL is starting in on him, Went there: SNL bonked on Biden -- twice 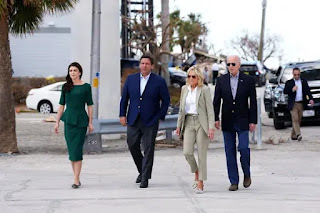 Nick Arama remarks on how liberals went crazy because Ron DeSantis' wife wore a green dress, Liberals Go Over the Edge With Unhinged Take on Casey DeSantis and 'Handmaid's Tale'.

At Da Wire, Trafalgar Pollster Signals Republican Voters Will Be Undercounted Again Ahead Of Midterms. Fletch Daniels at Am Think thinks The Polls are Lying: Dems in Deep Trouble. From Da Caller, ABC News Correspondent Says Democrats Are Doomed For Midterms As Voters Disapprove Of Biden. Nick Arama sees Exciting Movement for GOP in House Races, as Even ABC Admits Biden Is Albatross for Dems. At Town Hall, Kurt Schlichter confidently predicts Democrat Senate Disaster Ahead. At Da Caller Michael McKenna explains The Stars Will Align For Republicans In November. Here’s Why. Larry Thornberry at Am Spec reminds us Florida Is Not Purple — Regardless of the Dems’ Wishful Thinking .

Nicole Silvero at Da Caller reports Two Shot Outside New York Gov. Nominee Lee Zeldin’s Home While His Children Were Inside. He's running on lawn order. John Hinderacker at Power Line calls it Bringing the War Home. "This was not an assassination attempt inspired by liberal attacks on Zeldin. Apparently the fact that the shootings occurred in front of his house was coincidental. But it will be fodder for Zeldin’s anti-crime stump speeches from now until November."  Miranda Devine at NYPo says After the shooting outside his home, Rep. Lee Zeldin’s fight is clearer than ever, and Carl Campaneli points out his opponent, Hochul slammed for appointing bail-reform advocate as one of her top legal aides. Sauron's Eye is concerned that Ron Johnson and Mandela Barnes in tight Senate race in Wisconsin — CBS News Battleground Tracker poll. The Wa Free Bee notes Johnson Blames Deadly Kenosha Riots On Barnes’s Anti-Police Rhetoric. Fair enough. Also, ‘The Man Is Brilliant’: Mandela Barnes Praised Rev. Jeremiah Wright After Speech Accusing Israel of ‘Ethnic Cleansing.’  At Am Great, Matt Boose rhetorically questions Why Does John Fetterman Have Convicted Murderers on His Payroll? "They are only free now because a political hack who wants to break our justice system found it expedient to let them out." NYPo's Salina Zito gets Inside Dr. Oz’s miracle comeback against John Fetterman in US Senate race.

KT at Haut Hair, Female House GOP candidate comes out swinging after her sexual assault info is released.  At Fox News, Jennifer-Ruth Green takes aim at political opposition after Politico publishes records of her sexual assault "Green tells Fox News Digital that Politico ran the information about her assault after she pleaded with them not to do so." Probably illegally obtained, too.

"I'm surprised because Adam Wren spent time in this article focusing on every single detail down to the skirt I was wearing, down to the color of the skirt I was wearing, down to every single knob I touched, all of those things, but yet he writes clinically about one of the worst days of my life," Green added. "He has no idea the concept of being forced to be in a four by four, round circular area, 30 feet in the ground in a tower where you only have windows and a 30-foot drop on the other side, 30-foot drop to escape somebody who was blocking your path [with] somebody who has a clear intent with a weapon in hand, who is focused on trying to take advantage of you, and you're able to escape that with minimal physical harm. And he wants to reduce that to 50 characters."

Following the assault, Green said she was told to keep quiet about the incident by her superiors in the Air Force, as detailed in the Politico report. Green wrote a letter on Oct. 3 to the relevant U.S. attorney, the Air Force Inspector General and the Department of Defense to request a criminal investigation into how the documents were provided to Politico.

"I write to request an investigation into the unauthorized, unlawful release of my Air Force personnel file," Green wrote in the letter, which was obtained by Fox News Digital. "The fact that my file has been leaked in the course of my campaign for United States Congress leads me to believe that it was politically motivated." 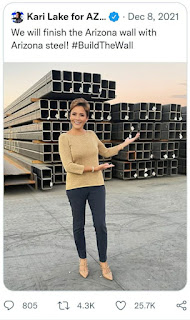 Breitbart reports that in Arizona, Democrat Katie Hobbs Says No to Debate with GOP Opponent Kari Lake – ‘No Desire to Be a Part of the Spectacle’. ABC approves, Some leading Democrats won't debate their election-denying opponents, "Candidates in Arizona and elsewhere say they want to avoid combative spectacles." Althouse takes on the controversy in How is sitting in the audience trying to make a debate happen?

I'm trying to read the NBC News article, "Kari Lake was booted from Arizona town hall audience before Hobbs took the stage/The scene, which took place a forum that has yet to air, is emblematic of the contrasting styles of the two candidates in Arizona's tight race for governor."

I have no quarrel with the headline — other than that "booted" suggests physical resistance to removal — but the text is slanted. It begins:

Democrat Katie Hobbs won’t debate her opponent in Arizona’s race for governor, yet Republican Kari Lake tried to make it happen at a candidate town hall that organizers say she disrupted.

Before describing exactly what Lake did, we're pushed to regard it as disruption. And we're told Lake "tried to make [a debate] happen," so I'm picturing Lake getting on the stage and attempting to argue with Hobbs.

Under the agreed-upon rules for the pre-recorded event, which was taped Monday and airs at 7 p.m. Saturday Arizona time, the candidates were not supposed to be onstage at the same time and Hobbs was supposed to go first.

Again, we're pushed to think that Lake got on the stage with Hobbs, and we're told that would violate the specific rules that Lake had agreed to.

But a problem arose before Hobbs even took the stage...

You can't violate the rule against being on stage with the other person if that other person isn't even on the stage. But, more importantly....

Lake was sitting in the front row, in a direct line of sight at where her opponent would sit.

At Twitchy,  One more time: Super compilation of leftist blue checks missing Lauren Boebert’s ‘two words’ joke. Mike LaChance at LI on how The Democrat/Media Smear Machine Comes for Herschel Walker in Georgia Senate Race. They should approve of a candidate who pays for abortions! Don Boldouc at Da Caller, The Walls Are Closing In On My Democrat Opponent And Her Campaign Knows It. Sen. Maggie Hassan. Tristan Justice at Da Fed warns Mark Kelly Can’t Hide From His Embrace Of Joe Biden’s Awful Agenda. "There’s one statistic Sen. Mark Kelly can’t run from: The Arizona Democrat has voted with President Joe Biden’s radical agenda more than 94 percent of the time."

PJ Media's Stephen Kruiser calls the Delaware Court overturning of universal mail-in ballots A Victory for Sanity in the Battle Against Mail-In Ballot Madness. Sarah Mantalbano at Am Spec asserts Alaska’s Ranked-Choice Voting Was a Fiasco. Nevada Should Take Note. "It forces voters to strategize like game theorists." Murky got what she wanted out of it. Shawn Fleetwood at Da Fed reports an Arizona County Packed Polls With Democrat Workers And Wants To Bury The Paper Trail, Lawsuits Allege.

From Da Caller, ‘It Was Terrifying’: Pro-Life Activist’s Wife Shares How FBI Agents, Guns Drawn, Arrested Her Husband In Front Of Kids “Mark says, ‘Please, I have seven babies in the house. I’m going to open the door, but please, I have seven babies,'” she said. “He opens the door and immediately there’s guns pointed at him, a gun pointed at me on the staircase and another gun over our threshold and scanning the home. Our children were right there … essentially they had guns pointed at them.” Thomas Lifson at Am Think challenges you to Spot the insurrectionists