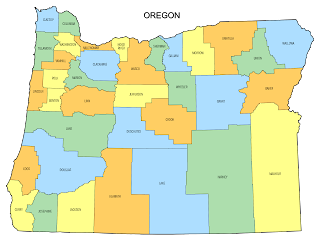 At Fox, Secede from Oregon? 'Greater Idaho' is on the ballot in two conservative counties "Rural conservatives fed up with Oregon's liberal politics consider moving border to join Idaho"

Many rural Oregonians fed up with the state's liberal politics want to move to Idaho — or rather, move Idaho to them.

The Greater Idaho movement proposes redrawing Oregon's borders so that about two-thirds of the Beaver State's land mass becomes part of neighboring Idaho. The movement has already gained support from nine counties in Eastern Oregon, and two more will vote on whether they want lawmakers to work on the logistics of moving the border.

"It makes more sense for Eastern Oregonians to get state-level governance coming from Idaho, where they share their values, share their culture, share their politics, than it does to be governed by Western Oregon," Greater Idaho spokesman Matt McCaw told Fox News.

Look at any election map and the problem Greater Idaho seeks to remedy is clear: By land size, Oregon appears conservative. Some counties voted nearly 80% for President Donald Trump in the 2020 election. But the population centers of Portland, Eugene and Bend have made it one of the most liberal states in the country.

"It's always been a problem because the west side has many more voters," McCaw said. "They have the numbers to dictate what happens statewide."

An urban-rural divide is nothing new, but McCaw said Eastern Oregon is unique because it borders a state that has "almost the same values."

Idaho voted 63.9% for Trump and just 33.1% for President Biden in the last presidential election. The Gem State is already a favorite moving destination among Oregonians who prefer its conservative politics or lower cost of living.

If approved, the Morrow County measure will require commissioners to meet three times per year to discuss how best to promote their county's interests in "any negotiations regarding the relocation of the Oregon-Idaho state border." Wheeler County's measure would direct local officials to ask the state to proceed with plans for moving the border. 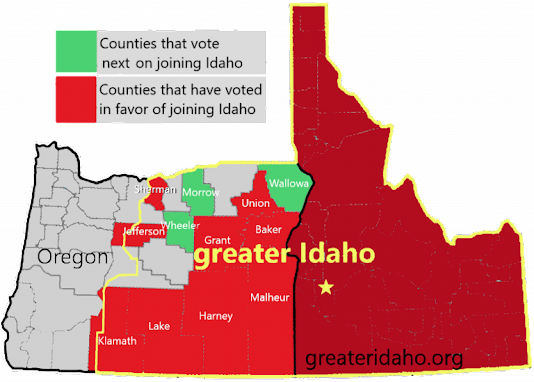