At Da Caller, Paul Moreno calls on "Sundown" Joe Biden Should Revive The One-Term Tradition. I'd call for a new tradition of a half a term if it weren't for Kamala. At the WaEx White House Report Card, Paul Bedard says ‘Where’s Jackie’ is a problem. At NewsBusters, Chuckie Todd Excuses Biden's 'Where's Jackie?' Gaffe, Just a Mistake, 'Move On'. PJ Media's Stephen Kruiser worries Biden's Last Brain Cell May Be the Death of the Republic.

At ET, Kellyanne Conway say Trump ‘Wants His Old Job Back,’ Might Announce White House Run Within Weeks. After the midterms? Guess who else is angling? John Hinderacker at Power Line warns Hillary 2024?. She certainly seems to have emerged from her chardonnay haze. At NYPo, Ex-Clinton adviser: Hillary setting up 2024 presidential bid with ‘open borders’ critique of Biden. Bob Spencer at PJ Media, notes Hillary Is Still Spreading Trump-Putin Conspiracy Theories. At the Victory Girls Carville claims Liz Cheney will be next House Speaker. Only if GOP leadership wants an insurrection. "Democrat strategist James Carville predicted that Biden will pardon Trump and that Liz Cheney will become Speaker of the House. Here's how he arrived at those predictions..." 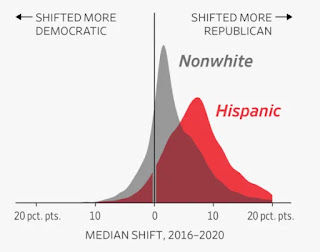 From Da Caller, Bill Clinton Just Sent A Massive Warning To Democrats About The Midterms " Clinton said that “defund the police and socialism” would not appeal to “people in the middle, especially like suburban middle-class voters, upper-middle-class voters,” claiming that they “had something to lose.” He's not wrong. I&I Ed Board warns If This Is The Dems’ ‘Winning’ Message, They Deserve To Lose … Bigly. Thanks to Steve Hayward at Power Line for The Daily Chart That Should Terrify Democrats. Jeff Folks at Am Think wants you to Remember: Leftist Media Polls Are Often Wrong by design.

Stacy McCain would like to inform you of The $250,000,000 Scandal That’s Wrecking Minnesota Democrats  "The question is now being asked: What did Tim Walz know, and when did he know it? And his answers so far seem kind of shaky. No one has claimed that Walz personally benefited from this fraudulent scheme, but rather that his administration failed to properly supervise the expenditure of federal funds through this “child nutrition” program run by the non-profit Feeding Our Future. . ."

In misc. election coverage, Breitbart has a Poll: Only 15% of Arizonans Feel Better Off Under Democrat Rule, Mark Kelly feeling the pain. KT at Haut Hair observes O'Rourke exploits deaths of Uvalde school shooting victims in new campaign ad. What else does he have? Jim Thompson at Red State details how Starbucks and Seattle Times Send Stupid 'Cease and Desist' Letters to Republican Senate Candidate for holding a cup of coffee and wearing a team jersey in a campaign ad. Hey, you sold them to him. At Da Wire, GOP Senate Candidate’s Blind Army Vet Husband At Center Of Legal Fight Between Her Campaign And The Seattle Seahawks. "Seattle-area journalist Brandi Kruse said on Twitter that they had, and also pointed out that while they sent Smiley a cease-and-desist notice, they did not level similar notices against a Democrat running for re-election to the Washington State Legislature." From PM, Obama's brother Malik endorses Doug Mastriano for PA governor, ""​​If he's with President Trump then I'm with @dougmastriano Pennsylvania Senator PA District 33," tweeted Malik Obama." Michael Ginsberg at Da Caller, Rep. Steve Scalise Slams Dem Candidate’s Tweet About 2017 Baseball Shooting. Breitbart claims an Exclusive: Darren Bailey Within ‘Striking Distance’ as Illinois Governor’s Race Tightens — ‘Voters Ready for Change’. A Republican in Illinois? Well shut my mouth!

We're still seeing reactions to David Bowdich,  deputy director of the bureau letter firing Peter Strzok. At Da Wire, READ IT: FBI’s Brutal Draft Letter Firing Disgraced Agent Peter Strzok Revealed. Twitchy,  DAAAMN! Peter Strzok’s dismissal letter so BRUTAL, so VICIOUS, so MERCILESS it goes viral and it’s a beautiful thing (screenshot). "Peter Stzok really stinks so nothing makes us happier than to cover his painful, brutal, SAVAGE dismissal letter. Maybe he can send Lisa Page a text or two and tell her Trump won’t ever be president … again. That worked out so well for him."

Dan Chaitin at WaEx reports on Ron Johnson's reaction to Investigation into FBI 'corruption' impeded by Durham probe, senator says. At Am Think Jack Cashill sees possible progress in The Seth Rich Case: The FBI’s Other Laptop Scandal  "In less than two weeks, however, thanks to a recent federal court decision, the FBI will be compelled to share its secrets, presuming there are any secrets and presuming too those secrets have not been scrubbed." At Am Great, Lloyd Billingsley reaches back even further for FBI incompetence, the Unabomber case, When Billy Met Teddy "How the FBI failed to protect America against a real domestic terrorist."

Are the National Archives putsching for more raids against Trump? Sure looks like it. At Da Mail, National Archives says it's STILL missing Trump White House documents nearly two months after FBI's Mar-a-Lago raid - and warns DOJ could be called in to recover 'unlawfully removed' files. Yah? Maybe it's you that "lost' them. But atop Da Hill, McMaster says he was never ‘uncomfortable’ about Trump handling classified information.

Madeleine Hubbard at JTN details how Conservatives, pro-lifers face political violence after Biden called Trump supporters 'threat', "Several of the attacks occurred in traditionally red states." At Am Great Maurice Richards thinks Leftist Political Terror Against Republicans Greenlighted by Biden and the Left. Margot Cleveland at Da Fed explores how the DC Bar Does Democrats’ Dirty Work By Tarring Opponents Right Before Midterms. "If the investigation of Jeff Clark is indeed a Democrat-fueled disbarment scheme, as it appears to be, it could start an escalating war of political retribution." Also recall how they gave Kevin Clinesmith his law license back after pleading guilty to lying to the FBI in the Durham probe.

Nicholas Ballasy at JTN reports on the J6 Star Chamber, Jan. 6 committee chair: Public hearing next week, no final report before election. "We're not sure we're going to do any more witnesses," said Rep. Benny Thompson. "We have a lot of information that we haven't shared with the public that wouldn't necessarily necessitate a witness." So you know they don't have jack. Also at JTN, John Solomon, Trump hails Ginni Thomas for standing firm on election integrity in face of Jan. 6 panel. "Too many Republicans are weak and they're afraid, and they better get strong fast or you’re not going to have a Republican Party and you’re not going to have a country anymore," the former president told the crowd.

Matt Margolis at PJ Media sees Biden Wash His Hands of Gas Prices Now That They're Going Back Up. He's running out of cheap oil to sell. From NYPo, Biden’s ‘woke’ green energy is a joke that makes us dependent on China, by design. WaEx warns an Expensive New England winter is coming. Well, they voted for it, most of them. Paul Driessen at Town Hall warns of The Coming Green Electricity Nightmare

How many billions of tons of copper, steel, aluminum, nickel, cobalt, lithium, concrete, rare earth, and composite plastics? How many trillions of tons of ores and overburden? How many mines, across how many more acres – with how much fossil fuel energy to operate the enormous mining equipment, and how much toxic air and water pollution emitted in the process?

To cite just one example, just those 2,500 wind turbines for New York electricity (30,000 megawatts) would require nearly 110,000 tons of copper – which would require mining, crushing, processing, and refining 25 million tons of copper ore ... after removing some 40 million tons of overlying rock to reach the ore bodies. Multiply that times 50 states – and the entire world – plus transmission lines.

How many processing plants and factories would be needed? How much fossil fuel power to run those massive operations? How many thousands of square miles of toxic waste pits all over the world are under zero to minimal environmental standards, workplace safety standards, and child and slave labor rules?

How many dead birds, bats, and endangered and other species would be killed off all across the USA and world – from mineral extraction activities, wind turbine blades, solar panels blanketing thousands of square miles of wildlife habitats, and transmission lines impacting still more land?

The College Fix reports on a Bill that would force universities to repay portion of student loan default. "Missouri Republican Senator Josh Hawley introduced the “Make the Universities Pay Act” on Sept. 21 in the wake of President Joe Biden’s announcement that taxpayers will absorb student loan debt to the tune of at least $400 billion, estimated to cost individual American taxpayers $2,500 each."   A great idea that will never happen; the politicians are too indebted to the schools.