Oregon governor Kate Brown (D.), an ally of Democratic gubernatorial candidate Tina Kotek, is the most-hated governor in America for the second year in a row, according to a poll published Tuesday.

The poll comes as Kotek seeks to distance herself from Brown, who has endorsed Kotek’s campaign. Kotek served as Oregon House speaker for seven of Brown’s years in the governor’s office., during which time she voted for a controversial drug decriminalization bill Brown signed into law last year.

Kotek has criticized Brown for the law’s implementation but defended the measure in gubernatorial debates. In the most recent debate, Kotek pushed for a "meth stabilization center" in Portland. The city's first stabilization center closed in 2019 because its own staff said it wasn’t properly treating addicts.

Portland, Oregon’s largest city, set an all-time high for homicides in 2021, and drug overdose deaths more than doubled in the state between 2019 and 2021. 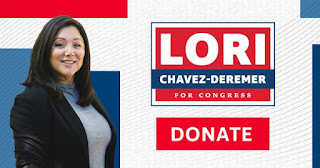 Second, Beege Wellborn at Haut Hair Sounds the alarm: Republicans have a shot at a congressional district in Oregon


There have to be some sweaty palms over this big battle of the hyphens.


…With the balance of power on the line in Congress, Oregon’s hotly contested 5th Congressional District race is in the national spotlight — and polls currently show a contest that’s too close to call.

Democrat Jamie McLeod-Skinner, who defeated incumbent Rep. Kurt Schrader in the May primary, is going head-to-head with Republican Lori Chavez-DeRemer. One certainty in the race is that Oregon will add another woman to its Congressional delegation to join Democrat Suzanne Bonamici, who represents the state’s 1st Congressional District. 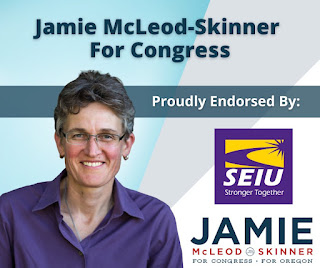 Considered a moderate, Kurt Schrader had been the 5th District’s congressman for seven (!) terms and was sent packing in the Democratic primary for the newly redrawn district by McLeod-Skinner. There were also the dang near de rigueur Democratic voting irregularities – what is it with these people?


Seven-term U.S. Rep. Kurt Schrader has been ousted in a Democratic primary in Oregon by progressive challenger Jamie McLeod-Skinner.

The vote count in the state’s 5th Congressional District was significantly delayed due to ballots with blurry bar codes in Oregon’s third-largest being rejected by vote-counting machines. Workers in Clackamas County had to transfer votes by hand to fresh ballots so they could be tallied.

It’s a huge district, kissed up against the southside of Portland, and running south “into rural communities in the central part of the state.” Portland progressives were more and more upset with Schreader’s moderate stance…

Finally, Joh Sexton at Haut Hair reports  It will cost $2 million to restore the Portland elk statue destroyed by Antifa in 2020

The Portland Parks Foundation just released an estimate of how much it will cost to restore the statue known as the “Thompson Elk” which was donated to the city in 1900. The bottom line is about $2 million including money to make changes to the street.

The foundation says it expects restoration, a new pump, and reinstallation could cost between $1.2 million and $1.3 million, as well as an additional $670,000 for street improvements, bringing the total to about $2 million…

It is now waiting to find out how much insurance will cover and what the city can pitch in.

Why is this necessary? Because back in 2020, social justice protests associated with BLM/Antifa held nightly protests near the fountain. At first the damage was mostly cosmetic, i.e. spray paint on the statue and the base. But the mob gradually worked themselves up into using the base of the fountain as a place to set a bonfire. This video is from the night of Wednesday July 1, 2020.

The next morning, the statue itself had survived (covered in spray paint) but the stone work around the fountain had been permanently damaged by the heat. You can clearly see some of the damage around 20 seconds into this clip.

They know who did it. They should take them to court, but they won't. They voted poorly.