An Oregon bar advertised an 11-year-old drag performer as part of an upcoming drag brunch event in a Monday Facebook post.

Old Nick’s Pub in Eugene, Oregon, is hosting the child drag performer, along with several adult performers, for its “story time” brunch Sunday. The event announcement included several pictures of the child in heavy makeup, false eyelashes, wigs and costumes.

The bar’s Facebook’s post said the underage performer “is here to show you what a 11 year old drag queen can do.”

“With all the charm and sweetness of a bowl of sugary cereal,” the child “is here to brighten up your morning with all her drag talent,” the post read. 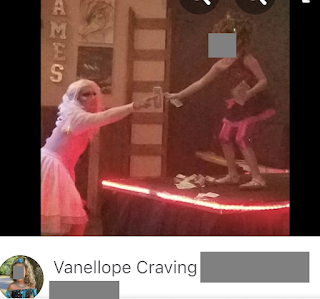 Da Caller makes a point of blocking the kids face and not revealing his name, but Google easily works around that.  At PM, Oregon child starring in controversial drag queen event had been mentored by an accused child sex offender

Controversy has erupted after a pub in Eugene, Ore. announced it is hosting a drag queen event featuring an 11-year-old child. An investigation by The Post Millennial has revealed that one of the child's "drag moms" was recently charged with child sex abuse offenses.

"Are you excited for drag queen story time brunch this Sunday morning?" Old Nick's Pub asked in a Facebook announcement. "Vanellope is here to show you what a 11 year old drag queen can do." The post featured several photos of "Vanellope Craving MacPherson DuPont," the stage name of the child, including one where she is touching her chest and her mouth is open. The Post Millennial is not publishing the real name of the child.

Old Nick's Pub is known locally in the university town for being a leftist bar, and it frequently hosts drag shows as well as sexual fetish events. Vanellope has performed at different events around the state of Oregon, sometimes with grown male performers in risqué outfits, since at least 2018. The girl has CashApp and Venmo accounts, where adults often send her cash tips. Photographs on her Facebook page also show her being showered on stage with dollar bills.

Forget it Jake, it's Eugene.