Back in July, 48-year-old Timothy Reynolds was driving through downtown Baltimore when he was approached by an aggressive gang of “squeegee kids” who attempted to extort money from him for their services. Reynolds refused their services and they began attempting to vandalize his vehicle. Rather than simply driving away, Reynolds unwisely pulled his vehicle over and came back to confront the extortionists with a baseball bat. Moments later he had been shot dead. An unnamed 15-year-old was eventually arrested for the murder and is due in court on November 17th.

A recent development in the case has drawn additional scrutiny to this situation, however. It turns out that Baltimore prosecutors had offered a plea deal to the alleged shooter, but the boy and his attorneys rejected it. Then the prosecutors turned around and withdrew the offer for some reason, saying that it never should have been put on the table to begin with. The boy’s legal team (which he apparently has now) seems to believe that they can beat the rap or at least get their client’s case transferred to juvenile court where he would be unlikely to face any jail time. (WBAL TV)

A teenager accused in a fatal shooting rejected a plea deal that Baltimore prosecutors said should not have been offered to the defense.

The plea deal rejected by the 15-year-old squeegee worker called for a 60-year prison sentence in the death of Timothy Reynolds, who police said wielded a baseball bat before he was shot in downtown Baltimore on July 7.

“We rejected the plea deal because, quite frankly, it was ridiculous,” said J. Wyndal Gordon, an attorney on the teen’s defense team. “It was a ridiculous plea deal. It did not match the facts or the evidence that they’ve been able to produce in this case.” 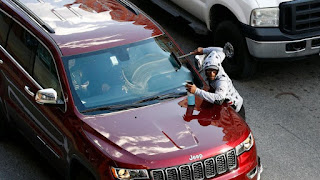 This case looked fairly open-and-shut at first, but now it seems to be breaking down into all sorts of confusion. The police eventually recovered quite a bit of evidence from the scene including the baseball bat and the gun, along with Timothy Reynolds’ body, of course. The shooting took place in broad daylight, but it’s unknown how many witnesses (if any) they have who might be willing to testify. That’s because this is Baltimore, after all, and snitches get stitches.

The defense is claiming that prosecutors are not cooperating with them during the discovery process. But they also seem to be certain that the police found no DNA from the boy on any of the evidence, nor did they lift any fingerprints from the gun. Of course, there was plenty of time for someone to clean that gun up before the police got hold of it, so that may not prove much of anything.

Then there’s the matter of the plea deal. Why even offer a deal in a case like this unless you have doubts as to whether or not you can secure a conviction? The defense sounds as if they think they have the upper hand here. The prosecutors wound up looking rather foolish retracting the offer after it was already extended, adding more chaos to the case.

The last issue to make the situation even murkier is the hearing on the 17th. The defense wants the case moved to juvenile court. If the judge agrees, it’s unlikely that the boy will do any serious time for this killing, assuming they have the right person in custody. But the prosecution originally managed to charge him as an adult, so we might assume that they knew they could make that stick. Under Maryland law, you can be charged as an adult at 14 years of age for murder or rape. But if you have a soft-on-crime, “reform-minded” DA or judge involved, that plan can fall apart as well. The bottom line is that what looked as if it should have been a solid murder charge that could have sent a serious message to the squeegee extortionists in Charm City may wind up crashing and burning on the rocks.

Just one of the things you need to consider when you have to visit Baltimore.