I was first introduced to the Milankovitch theory regarding the timing of glaciations during the Pleistocene back in graduate school in Geological Oceanography, where we were assigned to read the original Milankovitch papers and discuss them in class. It seems clear that issues Milankovitch proposed to be involved in the initiation and end of glacial periods, long term variations in Earth's orbit, precession, obliquity, eccentricity are important, the time scales involved are just too close to be coincidental, but the harder on looks, the less an actual answer seems clear. The problem:

It appears the Earth's climate has been on a wildly variable and generally downward (colder) trend for at least the past 5 million years. Also, the cycle appears to have been approximately 41,000 year during the early period, and then switched to a 100,000 cycle about a million years ago. The Milankovitch theory does not predict the overall decline or the switch from the 41k to the 100k cycle. Lots of people have tried, but a complete explanation continues to elude us. An article at WUWT takes another try at it, and as a bonus, has possible prediction for the end of the current interglacial, What Is Milankovitch Theory, What Is It Not, And What Can We Learn from It?. He believes that obliquity and precession combine to a beat frequency which drives the climate: 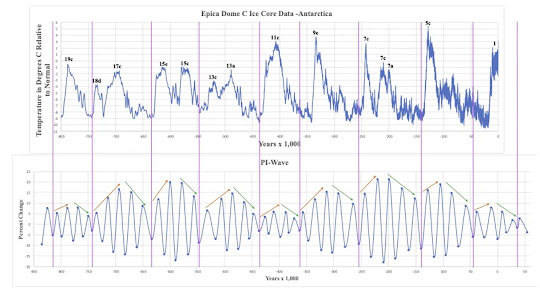 Maybe, maybe not. But what was interesting to me was that he had an interesting prediction:

From the model, the Holocene interglacial will likely terminate within the next 500 years. It’s a low-resolution estimate because the insolation minimum the earth is currently in is very shallow. A very similar interglacial occurred about 787,000 years ago, which terminated in a similar way.

The end of the Holocene interglacial, during which mankind went from a hunter-gatherer living on the bare edge of extinction to a world spanning  civilizations would (will?) have dire consequences for humanity. If we are extremely lucky, our inadvertent interventions in climate may, or may already averted the decline into another glaciation, no thanks to Greta Thunberg.

Another interesting paper to keep in mind while reading this, The inter-glacial cycle is not a 100,000-year cycle, it is a shorter cycle with missing beats

It looks to me like the former paper helps to explain the mechanism behind the second.