A famous physicist, and bit player on "The Big Bang Theory" Stephen Hawking unlocked a 'universe of possibilities,' NASA says

Tributes are pouring in for famed physicist Stephen Hawking, who died early Wednesday. He was 76 years of age.

In a tweet, NASA praised Hawking’s huge contribution to science. “His theories unlocked a universe of possibilities that we & the world are exploring. May you keep flying like superman in microgravity, as you said to astronauts on @Space_Station in 2014,” it wrote. A video accompanying the tweet showed Hawking talking to astronauts Rick Mastracchio and Koichi Wakata aboard the International Space Station in 2014.

Famed for his work on cosmology, black holes, and the basic laws of the universe, Hawking was among the most recognizable faces in science. His 1991 work “A Brief History of Time” became a global best seller.

Hawking owed part of his fame to his triumph over amyotrophic lateral sclerosis, or ALS, a degenerative disease that eats away at the nervous system. When he was diagnosed aged only 21, he was given only a few years to live.

Also known as Lou Gehrig's disease after the New York Yankee star who died of it, ALS usually kills within three to five years.

An amazing scientist who overcame amazing odds, Hawking was not above the common scientists failing in thinking that his expertise in one area carried over into arenas where he was just another commoner. His political views were those of a conventional liberal academic (anti-Brexit, pro-government funded health care) and in later years he became a bit of a crank regarding the possibility of finding alien life (he was worried that aliens would almost certainly wish us harm):


In 2010, Hawking worried what that answer would bring, describing the dangers of first contact with aliens in a Discovery Channel documentary. “If aliens visit us, the outcome would be much as when Columbus landed in America, which didn’t turn out well for the Native Americans,” Hawking says. “We only have to look at ourselves to see how intelligent life might develop into something we wouldn’t want to meet.”

He was also reported to be a bit of a dirty old man. Not that there was anything wrong with that. 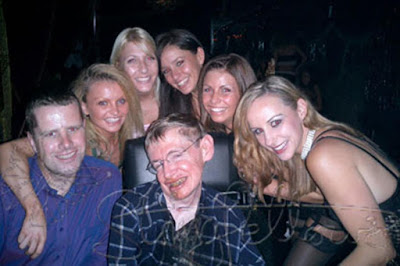 Hawking became a regular at Stringfellows strip club in London, and the proprietor recalls a hilarious run-in with the professor one night.

“I went and introduced myself and said, ‘Mr. Hawking, it’s an honor to meet you. If you could spare a minute or two, I’d love to chat with you about the universe,’” Stringfellow recalled.

“Then I paused for a bit and joked, ‘Or would you rather look at the girls?’

“There was silence for a moment, and then he answered, ‘The Girls.’”

Hawking has also reportedly been spotted numerous times getting lap dances at the California strip club Devore, and was even said to have frequented Freedom Acres, a swinger’s club in California.

“I have seen Stephen Hawking at the club more than a handful of times,” a member said, according to the Huffington Post. “He arrives with an entourage of nurses and assistants. Last time I saw him, he was in the back ‘play area’ lying on a bed fully clothed with two naked women gyrating all over him.”

Wombat-socho has "Rule 5 Sunday: Gal Gadot" up and open for business.
Posted by Fritz at 7:55 PM