The children's crusade against freedom have burned most of the media oxygen, there was very little Russiagate conspiracy mongering to report, but here's what I got:

Jonathan Tobin at NR: When Unfounded Smears Are Treated as Facts


Brennan admitted his charge that the Russians were blackmailing Trump was pure speculation. But that didn’t stop him or anyone else from spreading the smear.

The question was a reasonable one, but the answer was not. When the hosts of MSNBC’s Morning Joe program asked why President Trump had congratulated Russian president Vladimir Putin on being reelected, former CIA director John Brennan pulled no punches. In answering the leading question that implied Trump may be afraid of Putin, Brennan said, “The Russians may have something on him personally.” The Russians, he said, “have had long experience of Mr. Trump, and may have things they could expose.”

Coming from just another foe of Trump — which Brennan, an Obama loyalist, certainly is — the assertion could be dismissed as just a partisan cheap shot. But coming as it did from a career intelligence officer who served for four years as the head of the American intelligence establishment, this had to be more than a baseless conjecture.

By the end of the day, Brennan admitted his wild charge was not based on any actual information or intelligence revealed to him during the course of his duties but just a willingness to assume the worst about Trump. In a written response to questions from the New York Times, he said, “I do not know if the Russians have something on Donald Trump that they could use as blackmail.”
. . .
The point here is not just the decision of the editors of the Times to downplay information that undermined the entire story. Nor is it only that the rest of the mainstream media played it the same way. In particular, the coverage on MSNBC and CNN consisted of highlighting the accusation, treating it as a proven fact, and then following up with panels in which others speculated as to what evidence might substantiate Brennan’s charge, even though he had already admitted he had no such information. This episode encapsulates most of the media’s coverage of the entire Russian-collusion investigation over the last year, in which speculation about Trump’s guilt is always assumed to be true even if proof is never forthcoming.
. . .
It used to be that partisan assumptions fueled by pure speculation and unaccompanied by proof didn’t pass the smell test at any major network or newspaper. The fact that political smears of this sort have now become not only possible but also normal says a lot about the way animus for the Trump administration has distorted much of the media’s judgment and coverage. If liberals want to know why conservatives no longer trust the media about Trump even when the facts are on their side, they need look no further than the way the media covered Brennan’s unfounded accusation. 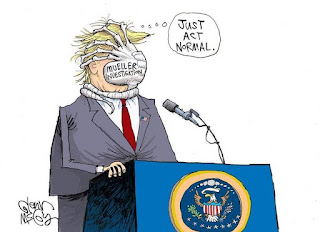 And for a fine example: Guccifer 2.0 is a Russian Intelligence Officer. Does That Mean Trump Team Colluded?


The link between Russia and the Trump campaign that special counsel Robert Mueller has been looking for may finally have materialized.

On Friday, The Daily Beast reported that the hacker of the Democratic National Committee emails known as “Guccifer 2.0” is, in fact, a Russian intelligence officer. The Daily Beast further reported that Mueller has brought onto his team the FBI investigator who tracked down the intelligence officer. Reportedly, Guccifer 2.0 inadvertently revealed his identity by failing to conceal his use of a Russian computer server on one occasion.
. . .
One individual associated with the Trump campaign was Roger Stone, who served as a campaign advisor. Stone has previously admitted to communicating with Guccifer 2.0, who has claimed to be a native Romanian speaker. If the report is accurate, and Guccifer 2.0 is, in fact, a Russian intelligence officer, this could be the crucial link that allows Mueller to charge Stone and any other members of the campaign who assisted Guccifer 2.0.

Stone has denied having advance knowledge of the publication of the hacked emails, but, in August 2016, before the emails of Clinton campaign chairman John Podesta were released by Wikileaks in October 2016, Stone tweeted that “it will soon be Podesta’s time in the barrel.” His tweet suggested that he knew that Podesta’s emails had been hacked and would be released.

What might this mean for Mueller and his team? The indictment filed against 13 Russians in February provides a clue. That indictment charged the defendants with what is known as a Klein conspiracy, that is, a conspiracy to defraud the United States. A Klein conspiracy is an agreement to impair, obstruct or defeat the lawful functioning of some agency of the federal government. In this case, the affected agency was the Federal Election Commission, among others, in its role to administer federal elections.

I look forward to Jeff Sessions using this interpretation of law to go after mayors and governors of sanctuary jurisdictions, who make no bones about their desire to "impair, obstruct or defeat the lawful functioning of some agency of the federal government." Almost any sort of resistance to any agency that involved more than 1 person could be forced into this rubric.


And in addition to charging Guccifer 2.0, Mueller could also charge anyone who conspired with him or aided and abetted him. One feature of the Klein conspiracy theory is that Mueller need not show that the co-conspirators were involved in the hacking, as long as he can show that they agreed that the emails would be disseminated afterwards, since the crime is not based on the computer intrusion, but on the disruption of the election.

Besides conspiracy, Stone or other members of the Trump campaign could be charged with aiding and abetting if they assisted or even encouraged either the hacking or the publication of the emails. Another potential charge is accessory after the fact for anyone who might have advised how or when to release the emails after they had been hacked.

And this is what really got my attention:


Sam Nunberg, a former Trump campaign member, has recently stated that during questioning by Mueller’s team, he was asked questions about Stone. It seems likely that Mueller is closely examining the relationship between Stone and Guccifer 2.0, which could provide the link he has been seeking to fulfill his mandate.  And if other members of the campaign participated in the decision to release the emails, then they could find themselves named in an indictment along with Guccifer 2.0.

Was "his mandate" to find some poor schlub remotely associated with the Trump campaign and invent a crime that somehow involves the Russians so he can claim victory and go home?
Posted by Fritz at 11:36 AM