A “fit and well” man has been discovered living with a whopping 9 centimeter-sized air pocket where his brain should be.

The unidentified Northern Ireland man, 84, was referred to a hospital by his doctor after he suffered multiple bad falls and had been feeling light on his feet.

He went on to experience a feeling of weakness in his left arm and leg over three days, which is when shocked medics at Causeway Hospital in Ireland discovered the massive air pocket where his brain should be.

Miraculously, a report published in the British Medical Journal Case Reports revealed he was suffering no confusion, facial weakness, visual or speech disturbance and the man said that despite the stumbles he was feeling well. 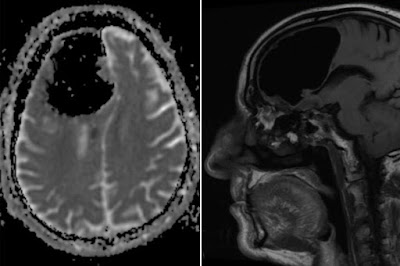 Apparently the Irish don't need that part of their brain.
Posted by Fritz at 8:02 PM