The first from Ann Althouse: "SNL" awkwardly needles the audience about the reality that Robert Mueller is not going to get Trump out of office.

Their faith in Mueller is flagging. . .


In last night's parody, a woman who'd been hoping that Mueller was going to get rid of Trump is dropped in on by Mueller who — in the style of The Bachelor — breaks the news that he's not going to be able to get Trump and we're going to need to find a way to accept and go forward with the reality that Trump is President.

Maybe you'll find it funny precisely because of the many long silent pauses that speak of the audience not finding it funny at all. The cast members — Kate McKinnon (as Mueller) and Cecily Strong (as the woman who can't believe this is happening to her) — are fully aware that they are — as actors say — dying out there, and it's interesting to watch them soldiering on with the material to which they must remain committed until they finally get to the part when they can break character and shout "Live from New York, it's Saturday Night" and unleash the blaring saxophone music and the cornball announcer spewing as many unfamiliar names as a Mueller indictment.

She's also unconvinced by Bloomberg's morning headline:  "Mueller Weighs Putting Off Trump Obstruction Decision/Delay would let him wrap up less explosive parts of inquiry/Obstruction decision might undercut probe, one way or another."


Headline and subheadlines at Bloomberg this morning.
I'm a little skeptical of this presentation...


The revelation is a peek into Muller’s calculations as he proceeds with his many-headed probe, while pressure builds from the president’s advisers and other Republicans to show progress or wrap it up....

So who needs to be prodded to wrap it up, just the Republicans? But Mueller breaks the investigation in two because he's choosing to wrap up part of it, but strategically extends the other part on and on, to where? No "pressure build[ing]" about that?


But even if Trump testifies in the coming weeks, Mueller may make a strategic calculation to keep his findings on obstruction secret, according to the current and former U.S. officials, who discussed the strategy on condition of anonymity.

Isn't this leaking worse than any of the substance of what could be called obstruction?

If, indeed, he is holding off charging Trump (as Democrats wish) to influence the midterms, he's guilty of the same charge he is charged with investigating, election meddling.

More on the Obama administrations decision to ignore "Russian meddling" until it became a convenient club for Democrats: Mother Jones? “Why the Hell Are We Standing Down?”, Mark Levin: Susan Rice let the Russians interfere — and now she’s ‘covering up’ and at The Lid: A New Look At The Obama Administration’s Actions On 2016 Russian Cyberattacks


Here’s where they lose me, and where everything starts sounding like an alibi. The story is that Team Obama was afraid of doing everything that a sensible, leadership-minded person would think of first.

The wrong moves – in perspective

This is what they did do. They assembled their task force, had some people start thinking up ways to retaliate against Russia, and sent Homeland Security Secretary Jeh Johnson off to tell the state-level election authorities that their voting systems needed to be designated “critical infrastructure,” so that DHS could “coordinate security” for all of them.

The state officials were strongly resistant to that move. It would inevitably increase federal authority over something that is explicitly made a responsibility of the states in the U.S. Constitution.

And you have to turn your brain off and stop thinking, to accept that the only way to secure state election systems is to increase federal authority over them. That’s not the case at all.

Nor is it the case that the American people mustn’t be troubled with full disclosure about a Russian cyber campaign, lest they panic and immediately lose faith in their government and political system. Yet running through the account of Team Obama’s premises is the idea that they were reluctant to say too much to the public because Donald Trump would make political hay out of it.

But that’s an alibi. What a leader does is get ahead of the problem by (a) telling the people, (b) having a plan, (c) helping the state leaders do what they need to do – not propose to basically take over their jobs for them – and (d) inspiring confidence rather than instilling fear.
. . .
But that’s not what the Obama administration did. It literally did none of the things I have just outlined. Instead, it dribbled out alarming hints that the Russians had our systems under attack; it proposed that the states agree, with no more information than that, to have their systems placed under increased – effectively open-ended – federal supervision; and it implied over and over as the months wore on that Trump was somehow involved in whatever Putin was doing.


If this guy goes after this the way [Robert] Mueller is scorching the Earth, you have a flurry of indictments based on what we already know," the Florida Republican told Fox News' "Fox & Friends."

DeSantis said he's been advocating that the special counsel be someone from outside Washington and the Department of Justice.

"When you are talking about investigating the top people in Obama's Justice Department and the FBI, if you are in that organization, it's just not the best vantage point to be able to do that type of an investigation," he said.

DeSantis said he also believes the Page warrant should be released publicly, but the FBI does not want to do that. 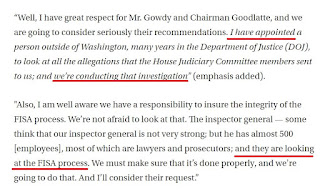 You wanna know how Jeff Sessions & others in the Trump administration are defeating the shadow coup plotters for the last year?


In Trump-Russia probe, what's with that meeting in the Seychelles?

"Back channels exist," he continued. "That's a fact, and they are not illegal. The notion that nine days before taking office the administration is supposed to be sitting in a closet somewhere doing nothing in ridiculous."

"That's basically right," added one lawmaker. "Plus, it would seem to contradict allegations of collusion — why have a secret Seychelles meeting to 'establish a back channel' if you just colluded in the campaign?"

WHEN HILLARY MET JOHNNY: What the former First Lady learned from grossly negligent CIA boss John Deutch. That only little guys go to jail for breaking the rules. But she already knew that.
Posted by Fritz at 1:45 PM