Have We Reached Peak SJW Yet? It's hard to imagine we haven't, but life is full of surprises.

Stacy has one of his weekly anti-feminist rants. I kind of let them go by because, well, they just don't move me that much, but in the middle of this one I found: 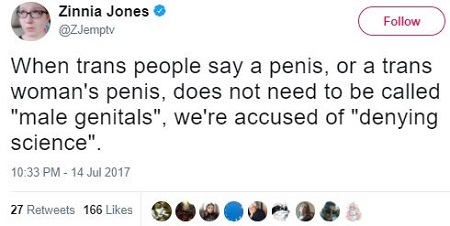 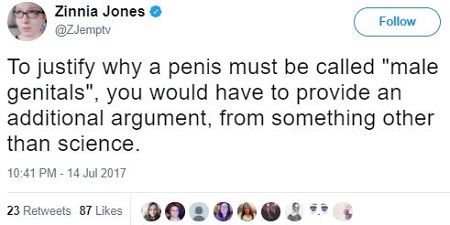 I pretty much just call them dicks wherever they appear.


Speaking of “science,” last month an anonymous question was posed in the “Evolution” section of the Internet site Quora.com:

“I got into an argument with my friend because I reject evolution because it’s heteronormative. Are scientists going to make evolution more inclusive or will they replace it with something else?” 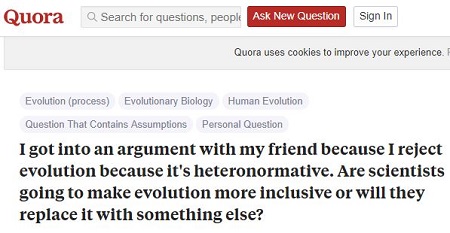 Permit me to speak on behalf of the Sane Community in declaring that the person asking this question is deranged, demented, delusional, bonkers, wacky, off her rocker, and cuckoo for Cocoa Puffs.

In short, she is crazy, and it is a waste of time to offer rational arguments in reply to craziness. We do a disservice to the mentally ill when we act as if their delusions deserve to be taken seriously, except as symptoms of their psychiatric pathology, yet this questioner on Quora received a serious reply from Anna Hardin, who recently received her Ph.D. in anthropology from the University of Minnesota:


Because science is just a set of methods we use to observe and report what is happening around us, scientists will not replace the theory of evolution unless another theory that better explains the change we observe in living things is better supported by the evidence. Evolution is well supported and has been for almost 200 years of scientific research, so it is unlikely that a better theory can be discovered.
To the point of heteronormativity, only the evolution of sexually reproducing organisms is heteronormative and only insofar as it requires sexual reproduction. On the other hand, the ways that scientists describe evolution is often very heteronormative, and some confuse sex and gender or ignore variation in sexual behaviors. Other scientists are working to change the ways that we talk about evolution so that it is less anthropocentric and less heteronormative. Heteronormativity is no reason to reject evolution, but it should motivate us to find better ways to discuss evolution and variation that are less biased.

Yeah, I guess so, but shouldn’t an anthropologist point out the basic problem with the jargon term “heteronormativity”? In point of fact, heterosexuality is not only normal, but necessary to reproduction of the species. . .

Reject evolution because it's "heteronormative"? Evolution doesn't care whether you reject it or not. It only cares whether you have progeny, and raise them to be successfully reproducing  members of the species. Fortunately, it seems unlikely that such feminists will contribute many genes to the next generation. Hopefully their ideas will die with them.
Posted by Fritz at 8:07 PM