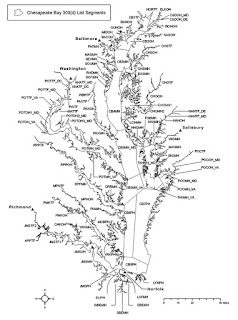 An article in the revived Bay Journal about how the vaunted "Bay Diet" is succeeding in much of the Bay, but likely to fail in my area, the Maryland mid-Bay: Even if all other Chesapeake ‘segments’ met their oxygen levels, one deepwater section would still miss the mark about 6 percent of the time. Policy makers wonder if that is good enough.

a handful of places around the Bay were always likely to fall short of prescribed cleanup goals even if all of the actions to support the Bay’s “pollution diet” were fully enacted. Those places were given variances that allowed their dissolved oxygen levels, at specific times and locations, to fall short of established minimum levels.

New computer model projections show that some of those areas may no longer need such variances if current pollution reduction goals are met. But the deepest area in Maryland’s portion of the Bay, between the Bay Bridge and the mouth of the Patuxent River — a segment known as “CB4” — may be even more problematic.

The state-federal Bay Program’s computer models show that, even if all planned nutrient reductions are achieved, CB4 would still miss its oxygen goal by 6 percent during an average summer — up from the 2 percent previously projected.

Whether that’s important or — like horseshoes — close enough, is hard to say. The answer could have far-reaching implications for the cleanup and its cost. 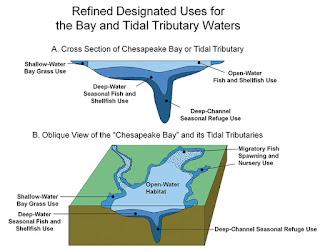 
In the updated projections, current cleanup levels would eliminate the need for variances in the Patapsco and Chester rivers. That’s good news.

But in the deep channel of the Mid Bay — historically the hardest place to meet oxygen goals — the latest computer model projections show the same level of nutrient load reductions won’t achieve the same level of oxygen benefit. Therefore, the variance in that area — the amount of time and space the oxygen levels in that area could be exceeded —would need to increase from 2 percent to 6 percent.
How close is close enough?

Rich Batiuk is the associate director for science with the EPA’s Bay Program Office and was pivotal in the development of the Bay’s dissolved oxygen criteria. Batiuk said the variance provides a needed “release valve” in policy making.

If planned nutrient reductions are achieved, the other 91 segments of the Bay would fully achieve their oxygen goals. But getting 1 ppm of oxygen in the deep channel portion of the remaining segment to fully comply with Maryland’s water quality standards would require a huge additional effort by all of the watershed states that would cost billions of additional dollars, Batiuk said.

“Just that little push, you’re talking another 10 million pounds of nitrogen loads that must be reduced,” he said. “That’s not a small chunk of change.”

But 6 percent seems to be the upper limit, Batiuk said. If the variance for CB4 were allowed to increase by more than that to accommodate greater nutrient loads, other areas would begin to miss their oxygen goals as well.

Yep, I knew all along that attaining the goals for oxygen in the deep channel areas was going to be a big stretch, for several very physical reasons. The area is isolated from the surface by a density gradient (pycnocline), but receives the organic material that is grown in surface waters, and which washes in from the tributaries. Isolated and largely dark, oxygen is used, but not regenerated as it is in the surface. So, we will still continue to see low oxygen in the deep water (with rare anoxia), and occasionally, when the wind blows right, low oxygen water will continue to have "crab jubilees" just like they did in colonial days.