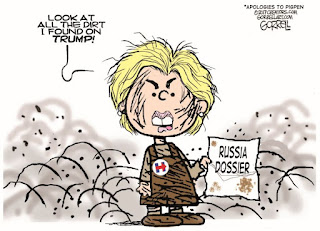 Carter reports that her sources tell her McCabe will be fired -- they'd be "surprised" if he weren't -- and criminal charges are being considered.

Hannity also reporting that McCabe has been "begging" his superiors to not fire him before he can retire with benefits on Sunday. It sounds like if he's fired he won't get those benefits.

Hannity also says he's hearing there's a "high probability" that Sessions will appoint a second special counsel to investigate the FBI's and DOJ's behavior during and after the election, with Grassley and Graham vowing to apply as much pressure as possible to make it happen.

Maybe he can join his buddy Comey's book tour: Fired FBI director James Comey cashes in with $97-a-ticket coast to coast speaking tour to promote his account of life with Trump I would think today, late this afternoon will be the announcement. I feel kinda sorry for the guy; but that's what happens when you get involved with the Clintons. Like Pigpen, they have so much dirt it just jumps off onto people associated with them, to wit: Big Storms Brewing in California, Other Places for Clinton Foundation. It turns out they reported conflicting  things to the State of California and the Federal government. I'm sure they'll get an indulgence.


. . . according to a new book by progressive journalists Michael Isikoff and David Corn, "Russian Roulette: The Inside Story of Putin's War on America and Donald Trump's Election," not only did Fusion do opposition research, something every campaign does, it also did aggressively hostile opposition donor research.

"In 2012, then-President Obama had an 'enemies list' on his campaign website with the names of Mitt Romney's biggest donors," noted PJ Media's Debra Heine.

That enemies list was placed on the Obama campaign's Orwellian "Truth Team" web site. The site called them a "group of wealthy individuals with less-than-reputable records. Quite a few have been on the wrong side of the law, others have made profits at the expense of so many Americans..."

That kind of vilification of decent, law-abiding, successful Americans is bad enough. But to drive home the intimidation, each of the names on the list was subsequently tweeted out from the @TruthTeam2012 twitter feed, along with their supposed misdeeds, most of which really amounted merely to tough or unpopular business decisions they had to make.

Obama "relied on a vast grassroots network to coerce, bully, boycott and vilify individuals lawfully taking part in the political process, just as his own donors and supporter are freely allowed to engage," wrote the Daily Signal back in 2012.

Mueller witness is convicted pedophile with shadowy past

Nader was caught in Mueller’s web a few days before the anniversary of Trump’s inauguration. He was transiting through Dulles International Airport outside Washington, on his way to Trump’s Mar-a-Lago resort, when his plans changed — abruptly and involuntarily.

Mueller’s investigators stopped him, people familiar with the case said. His electronics were seized and he was then allowed to go see his lawyer. Nader later agreed to cooperate with Mueller’s investigation, said the people with knowledge of the case as it pertains to Nader. They weren’t authorized to speak publicly on the case and demanded anonymity.

Sounds like he's prepared to say whatever Mueller wants him to say for his freedom and to retain his wealth. Paul Manafort asks judge to dismiss Mueller indictment in D.C.


Paul Manafort's lawyers filed a motion to dismiss the indictment, filed in D.C. by special counsel Robert Mueller, which includes five charges against Manafort for failing to register as a foreign agent and for money laundering. The argument: His lawyers, Kevin Downing and Thomas Zehnle, say the indictment isn't fair because Mueller is operating outside of the scope of his initial duty: to determine whether and how Russia worked with the Trump campaign during the 2016 election. Downing and Zehnle argued that Mueller's exceeding "power is not merely tantamount to a blank check. It is a blank check the Special Counsel has cashed repeatedly."

The other side: Deputy Attorney General Rod Rosenstein, who oversees the Russia probe and Mueller's actions, told USA Today, "The special counsel is not an unguided missile... I'm very confident that when the history of this era is written, it will reflect that the department was operated with integrity."

But Manafort's team is taking issue with Mueller investigating the former Trump campaign manager for things that happened before 2016. In particular, Manafort's "suspicious" banking activity in 2014, which the FBI decided was "too petty" then to charge him for anything, according to a BuzzFeed review of internal FBI emails.

Another set of documents in the motion explains why, according to his lawyers, two of the five counts "charge a single offense" regarding his issues with registering as a foreign agent. Therefore, they argue, these two charges could unfairly influence the jury by making it seem like Manafort "has committed not one, but several, offenses."

Manafort's team filed a similar motion to dismiss said charges in January.
. . .
What they're saying: "It's clear the defense has a Plan A, B, C, and so on, which is logical," said a person in the litigation communications industry who has been following the case. "This likely won’t be resolved for years even if Paul Manafort is successful in his initial motion to dismiss these charges. He appears to have a well thought-out defense and is playing the long game."

Did the real estate deal come to fruition? Apparently not. . .


Here’s what I think Mueller is doing, because I know that they don’t have anything on collusion, and now with Corn and Isikoff admitting that this idiot Steele doesn’t even believe the golden showers story, they don’t have anything on collusion. And that’s why Rosenstein didn’t limit it to that. That’s why Rosenstein didn’t charge Mueller with a specific crime because they want these people gone.


Even as the New York Times reported Thursday that special counsel Robert Mueller has subpoenaed the Trump Organization for documents pertaining to any relationship the president’s business empire had with Russian interests, a major development in a potentially explosive probe, senior political strategists of both parties conceded that it stopped registering as a top concern for American voters months ago.

Just Yes or No, Sen. Mark Warner, Did You See Any Collusion Proof? "Top Senate Democrat, in meandering answer, finally gets around to apparent concession — via silence — that he's seen no evidence" You’re Being A Little Unfair To Trump On This Latest Russia Thing, Says … Democratic Senator To CNN

They're everywhere (Clinton donors in government)! I found this one particularly interesting: A Little Known Tweak To FISA Rules In 2015 Has Big Implications For The Carter Page Warrant


"Congress requires the FISA court to maintain a pool of lawyers friendly to civil liberties who are willing to challenge the Justice Department's applications for a spy warrant. But the court almost never uses them."

If they're going to have a secret court, they need secret lawyers.


Had the FISA court appointed amicus curiae to assist in its review of the Page case that lawyer could have zealously advocated for the privacy and civil liberties of Page. But instead, the FISA court heard the one-sided (and incomplete) version presented by Obama Administration appointees.

If The Court Did Appoint One In The Carter Page Case, That’s Worse

What if, though, the one amicus curiae the FISA court appointed in 2016 was asked to assist the court in its review of the Page wire-tap application? After all, the statute requires the FISA court to appoint amicus curiae when it faces a “novel interpretation of the law.” One would think that seeking to wiretap a former campaign volunteer of Donald Trump, right before the presidential election, because of his supposed role in a purported conspiracy between the Russians and Trump, would present a novel interpretation of the law.

Still, I find it extremely unlikely that the one case that the FISA court sought guidance from amicus curiae, out of more than 1,500, involved the Carter Page application. But if the FISA court did appoint amicus curiae to assist in the Page case, that is even worse because, according to the Report of the Administrative Office of the U.S. Courts on Activities of the Foreign Intelligence Surveillance Courts for 2016, “The name of the individual appointed to serve as amicus curiae is Marc Zwillinger.”  And Zwillinger was a donor to the Hillary Clinton campaign via Hillary for America.


The pair even schemed about how to set up a cocktail or dinner party just so Contreras, Strzok, and Page could speak without arousing suspicion that they were colluding. Strzok expressed concern that a one-on-one meeting between the two men might require Contreras’ recusal from matters in which Strzok was involved.

“[REDACTED] suggested a social setting with others would probably be better than a one on one meeting,” Strzok told Page. “I’m sorry, I’m just going to have to invite you to that cocktail party.”

“Have to come up with some other work people cover for action,” Strzok added.

It is not known whether the proposed party happened as planned.

While working as one of the top counterintelligence officials at the FBI, Strzok reportedly took part in the FBI’s interview of on January 24. Flynn later pleaded guilty to one charge of providing false information to federal investigators. Strzok later left the FBI to join Mueller’s special counsel team, which obtained the indictment of Flynn.


The late pundit Robert Novak used to say that government officials can choose to be either “a source or a target.” In other words, leak information to reporters and you can count on flattering coverage and protection from them. An added bonus to leaking, as former Intelligence Director Jim Clapper discovered, is that the network to which you are leaking will turn you into a paid contributor. According to Congressman Jim Jordan, speaking to Fox News, “Clapper was actually the guy leaking information” to CNN about the presidential briefing on the Steele dossier that served as the pretext for the media feeding frenzy over possible Russian blackmail of Trump.

One can only laugh at the utter fraudulence of CNN: it pads its panels with government officials who leak to it, then presents them to its audience as “nonpartisan” experts commenting on the aftershocks of the very stories they leaked.

Devin Nunes: ‘I Don’t Read the New York Times’ The NYT has certainly predicted 1,000 of the last 10 White House turnovers.

So much for being Putin's lapdog: Trump administration hits Russian spies, trolls with sanctions over U.S. election interference, cyberattacks. Of course, Democrats will think it's never enough, right up until they say it's too much.


"... just before the 2016 election as part of a nondisclosure agreement she is now trying to void. The same Trump attorney who brokered the deal with Daniels, Michael Cohen, filed a libel suit in January against BuzzFeed and four of its staffers over publication of the so-called dossier compiling accurate, inaccurate and unproven allegations about Trump’s relationship with Russia. Now, BuzzFeed is using Cohen’s libel suit as a vehicle to demand that Daniels preserve all records relating to her relationship with Trump, as well as her dealings with Cohen and the payment he has acknowledged arranging in 2016...."

Interesting! Read the whole thing. Seems like it could work.