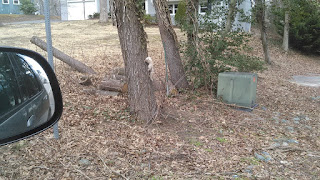 For a couple of weeks now, we've been getting glimpses of this white squirrel (more specifically a white Eastern Gray Squirrel) in an area not far from our house

This afternoon, on our way to the beach it was out, and Georgia wheeled around and I tried a couple of cell phone shots. I can't really tell if this is an albino or merely an exceptionally white squirrel: 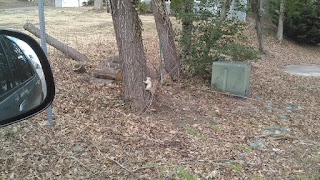 For some odd reason, eastern grey squirrels in the US do have a gene that will make their coats white. It’s somewhat rare to see a white squirrel, though, because white squirrels are likely highly selected against. In other words, predators to squirrels such as hawks really like it when their prey is highlighted white!

There are a few towns in the US, though, that have very high numbers of white squirrels. This could be for a few reasons. First, predators in towns tend to be low. This cancels out the negative selection against the white morph. Sometimes in towns, a few neighbors will also select against the normal coloration of eastern grey squirrel. Yes, that happens. After a few generations, all you get are whites, and they can spread to the rest of the town! Fascinating!

Skye wants to know if it tastes better than regular squirrels.

It was chilly down at the beach, and the tide is still so high we had to walk around the Calvert Beach cliff to get to Matoaka Cottages. We found a few teeth, none spectacular, but Georgia did find this: 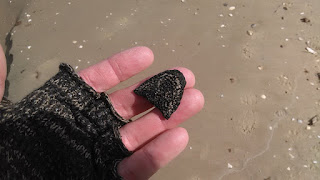 The people on the Calvert Cliffs fossils Facebook page seem to agree it's a scute from a sturgeon.
Posted by Fritz at 7:21 PM