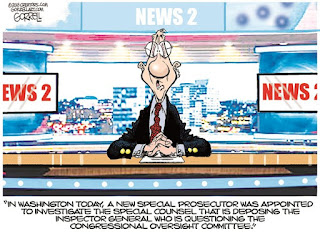 The news du jour is the fact that Andy McCabe apparently started a perjury investigation on Jeff Sessions based on his Congressional testimony: Fired FBI official authorized criminal probe of Sessions, sources say


Democratic lawmakers have repeatedly accused Sessions of misleading them in congressional testimony and called on federal authorities to investigate, but McCabe's previously-unreported decision to actually put the attorney general in the crosshairs of an FBI probe was an exceptional move.

One source told ABC News that Sessions was not aware of the investigation when he decided to fire McCabe last Friday less than 48 hours before McCabe, a former FBI deputy director, was due to retire from government and obtain a full pension, but an attorney representing Sessions declined to confirm that.


Fired FBI deputy director Andrew McCabe launched an investigation against Attorney General Jeff Sessions last year as part of a “coup” organized by Obama-era holdovers in the Department of Justice.

“We already know Andrew McCabe was one of the primary conspirators in the plot to illegally spy on, manufacture evidence against, and then impeach a duly elected president using Illegitimate criminally obtained FISA warrants as pseudo legal cover,” according to an analysis of the revelation that McCabe targeted Sessions in a “covertly launched a criminal case.” By taking out Sessions, the analyst alleges, McCabe hoped to replace the attorney general with fellow conspirator Sally Yates, who was acting attorney general before Trump fired her in January 2017.

In a 35-message analysis on Twitter, @NameRedacted7 explains that McCabe — along with former FBI director James Comey, rogue FBI agents Peter Strzok and Lisa Page, former associate deputy attorney general Bruce Ohr, former assistant attorney general Peter Kadzik, and other Democrats in the Justice Department — were complicit in “spying on Team Trump” through illegally obtained FISA warrants. (“8 top DOJ and FBI officials under a cloud over roles in Clinton, Trump investigations.”) The conspirators then launched an effort to “frame” Sessions, which was part of a “staggering” attempt to “decapitate” the executive branch in “show trials,” according to @NameRedacted7.

8. Think about this: at the exact time McCabe, Strzok, Yates, Ohr, Page, Preistap, Baker, Comey, Rybicki were *actively* spying on Team Trump via the 702 queries & Carter Page title 1 FISA warrant, they were actively running a case to frame the Attorney General of the US.
— NameRedacted7 (@NameRedacted7) March 21, 2018


I wonder who could have leaked this. It would have to be someone with high-level FBI knowledge, who suddenly has an axe to grind with Jeff Sessions and the president. Imagine what else such a person might know and might be willing to share in a tell-all book, the royalties from which could fund a lavish retirement just in case his nest egg is momentarily a little short.


Right! He could say that the news that Sessions canned a guy who had investigated him instead of recusing himself as he’d promised to do looks shady enough that the public will lose confidence in the DOJ if Sessions continues in office. 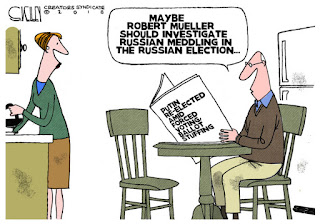 Wray On McCabe: I’m Adamant About Keeping Politics Out Of Personnel Moves You can say that as much as you want, but no one on either side will believe you. McCabe says his Russia probe work sparked smear campaign before firing - The former FBI deputy director also calls his ordeal 'personally devastating.' Before you tear up, remember that General Flynn is losing his house, while McCabe may have to muddle around in a high powered Democrat law firm a while before retiring at 55. Facts about the McCabe termination you can use to educate your liberal friends. You can lead a horse an ass to water. . .


"My sources tell me [Brennan] was leaking almost weekly or daily, and he was taking that bunch of phony crap supposedly from Russia, and peddling that through the Congress and the media, he was one of the active people," said Kallstrom. "I've known him a long time and I think he's involved, and quite frankly, I think it goes right to the top, quite frankly."


John Brennan, like Clapper, McCabe, and Comey, is a liar for whom ideological goals overrule political morality and personal honor. The mind harkens back to the day when an op-ed in the Washington Post, that right-wing rag, called for Brennan to be fired for conducting illegal surveillance of the Senate Intelligence Committee and then lying about it. . .


Let’s recall that what got us to this point is that when to their horror, the friends of Hillary in various government agencies like the FBI, the CIA and the DIA realized she had lost and Donald Trump was in fact set to be the next president, they set to work. The critical part is the Trump/Russia collusion narrative would not have worked unless the likes of Brennan/CIA, Clapper/DIA/ and Comey/McCabe/Strzok from the FBI started feeding leaks to various friendlies in the media. Everybody leaked to the media and they had their constituency with this or that favorite reporter. The question now: Is this still going on? Based on the evidence, the answer is yes. . .


"Bob Mueller should be allowed to finish his job. I think it was an excellent appointment. I think he will go wherever the facts lead him and I think he will have great credibility with the American people when he reaches the conclusion of this investigation. So I have a lot of confidence," McConnell told reporters. "This is a thoroughly credible individual, I think it was an appropriate appointment, and we all anticipate his finishing the job and telling the American people what they need to know about this episode."

Except for that anthrax thing, and the Ted Stevens thing and . . .

Rushbo says The Mueller Investigation Is a Cover-Up


The Mueller investigation is essentially a cover-up of all that Hillary and Obama did during the campaign to spy on Trump and to try to engineer a Hillary win so as to get essentially a Barack Obama third term.

It's time for Mueller to produce evidence of wrongdoing by Trump or drop it Before he resorts to following Trump people around and issuing traffic tickets. Trump's Mueller Fixation Seen as Strategic Move. Part of his four dimensional chess? Mueller team so far has indicated 4 main areas it wants to ask the President about, but is Mueller willing to testify to the President under oath? Because I think we can come up with some good questions. Rep. Gohmert: 'I Think Mueller Should Be Fired'.


"The only reason that, I think, he should not be in actuality fired is because we have some establishment Republicans in the House and Senate that say, oh gee, if he were to fire Mueller, we might need to impeach the president," said Gohmert.

Via Wombat-socho's "In The Mailbox: 03.21.18", DC Whispers: Former FBI Director Goes On Record – “Comey, McCabe, & Brennan All Corrupt, And Everything Leads Back To Obama”, Joe For America: Seth Rich Investigator Victim Of Hit & Run, Shooting and Victory Girls: John McCain Whips Out The Derp.
Posted by Fritz at 9:13 AM