Sorry, But There is no "School Shooting" Epidemic


Promising a “revolution” to “change America” by disarming citizens is rather a radical ambition, but ABC News and other liberal media organizations promote this propaganda without offering any critical analysis or providing access to facts that contradicts Hogg’s claims.

The liberal media did not produce news coverage of Saturday’s protests. Instead, they produced one-sided publicity for gun-control activists. The media have uncritically amplified the claim that events like last month’s Parkland massacre represent an “epidemic” of “gun violence.”

Facts contradicting this rhetoric are not difficult to find, and any journalist who ignores these facts has failed his professional duty. 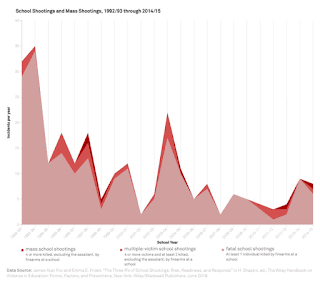 Since 1996, there have been 16 multiple victim shootings in schools, or incidents involving 4 or more victims and at least 2 deaths by firearms, excluding the assailant.
Of these, 8 are mass shootings, or incidents involving 4 or more deaths, excluding the assailant. . . .
Mass school shootings are incredibly rare events. . . . [O]n average, mass murders occur between 20 and 30 times per year [in the United States], and about one of those incidents on average takes place at a school.
Fridel and Fox used data collected by USA Today, the FBI’s Supplementary Homicide Report, Congressional Research Service, Gun Violence Archive, Stanford Geospatial Center and Stanford Libraries, Mother Jones, Everytown for Gun Safety, and a NYPD report on active shooters.
Their research also finds that shooting incidents involving students have been declining since the 1990s.
Four times the number of children were killed in schools in the early 1990s than today, Fox said.
“There is not an epidemic of school shootings,” he said, adding that more kids are killed each year from pool drownings or bicycle accidents. There are around 55 million school children in the United States, and on average over the past 25 years, about 10 students per year were killed by gunfire at school, according to Fox and Fridel’s research.

If school shootings are a rare phenomenon that is actually declining — that is to say, the opposite of an “epidemic” — why did the February shooting at Parkland High School inspire more than a month of saturation media coverage advocating gun control? The answer can be summarized in two words: Partisan politics.

Donald Trump is president, Democrats are angry, we are a few months away from a midterm election, and the Democrat-controlled liberal media organized a propaganda campaign to demonize Republicans, by blaming them as responsible for the deaths of students in Parkland. A coalition of Democrat-aligned organizations, including Planned Parenthood, spent millions of dollars to fund Saturday’s protest rallies. . . 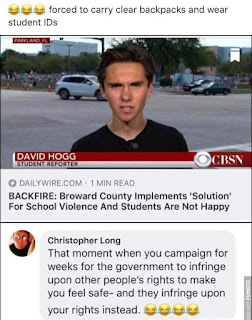 
FOLLOW THE MONEY: Who Runs March for Our Lives? “It’s a strange political fact, but nearly every major anti-gun group has been a front group. The NRA is maligned 24/7 and yet it’s completely obvious whom it represents. Despite the efforts to tie it to everyone from firearms manufacturers to the Russians (if you can’t tie any random Republican thing to the Russians these days, you won’t be working at the Washington Post or CNN for very long), it represents its five million members. Anti-gun groups tend to represent shadowy networks.”

I don't know about you, but at least the kids persuaded me to renew my lapsed NRA membership. I haven't shot any of my guns in years, but I want to preserve the right to own them and use them.

And I'm not alone: Membership in Gun Groups Is Spiking After the Florida Shooting


The National Rifle Association and its allies have found their political influence under fresh scrutiny as gun control advocates push for new restrictions and corporations sever their ties in the wake of the deadly high school shooting last month in Parkland, Florida. But outside the gun control debate in Washington, membership in the NRA and gun rights groups across the country, which includes more than five million Americans, is spiking, according to people familiar with the numbers.

The spike isn’t a surprise, as such increases happen whenever people feel their Second Amendment rights are under threat, and many groups reported similar surges after the 2012 shooting at Sandy Hook Elementary School in Newtown, Connecticut. But as gun control groups seek to use the anti-NRA backlash to mobilize their grassroots, recruitment this time seems to have taken on a more urgent tone.