I Think It's Going to Rain Today

Actually, it has already dropped slightly over 1 inch, and it looks likely to continue through most of the day, as wanna be Tropical Storm Irma makes it's passage along the East Coast:

The main impacts will be locally dangerous surf and rain that slows travel for a while or ruins a day at the beach.

Small craft operators should exercise caution outside of protective intercoastal waterways as the potential tropical cyclone kicks up winds and waves. 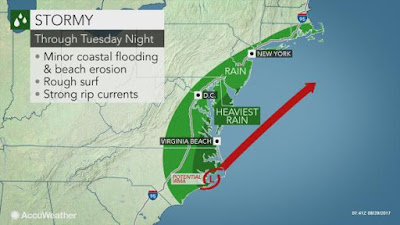 It's windy, blowing 18-22 kts, but nothing serious, yet. But it does inject a little local color into the problems Texas and Louisiana are experiencing.

Wombat-socho has "Rule 5 Sunday: Butts! Boobs! The Final OUTRAGE!!!" up on time and within budget.
Posted by Fritz at 10:36 AM