Well, marsh actually, but it would work for swamps too, if not as well with trees: Sea level is rising. Delmarva refuge's solution? Build taller marshes

There's an old country song whose chorus goes, "Give me 40 acres, and I'll turn this rig around."

It's unclear whether that Red Simpson ditty is popular inside the headquarters at the Blackwater National Wildlife Refuge. But trade the word "rig" for "marsh," and that's exactly what federal officials and conservation groups are doing to combat the twin threats of rising seas and sinking land there.

They hope that the $2.1 million marsh restoration project, which at 40 acres is the largest of its kind ever attempted in the Chesapeake Bay region, provides a road map for similar efforts elsewhere around the estuary. 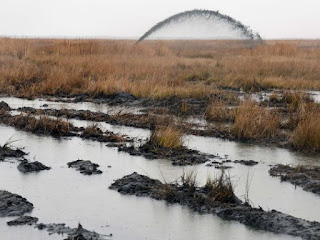 Let's, that's around $50,000 an acre. A little more than a building lot would cost in our neighborhood, but a lot more than undevelopable land would be worth. But if you really value the marsh, yeah, it's worth it. And I assume that if they really get into the business, the costs will go down due to economies of scale. There's plenty of deep mud available in the region. How about some of that stuff at the bottom of the Conowingo Pool, that we're worried about how to get rid of?


"We literally have life that would be gone," U.S. Sen. Ben Cardin of Maryland said Sunday as he toured the recently completed project. "We can't stop sea level from rising, but we can adapt to the consequences."

Late last year, workers dredged 26,000 cubic yards of inky mud from the bottom of the Blackwater River and piled it up on a largely submerged marsh. Returning the following spring, they plugged about 220,000 sprigs of cord grass and other water-loving natives into the newly formed earth.

With the benefit of a summer's growing season, a deep green pasture of marsh now stands where there had been open water a year earlier, officials say.

That grass is perched on land that is up to nearly 8 inches higher than it was before. That should extend its life by "several decades" beyond what is currently forecast for other, untouched marshes inside the nearly 30,000-acre refuge, they say.

"You're maximizing the ability of these plant communities to respond to future sea level rise," said Matt Whitbeck, a wildlife biologist at the refuge.


It worked in New York: