Obamacare continues to spiral down as the Last Obamacare Insurer In Iowa Wants 57% Rate Hike Next Year. But that doesn't mean business is bad for all;  New Centene CEO is another example Obamacare's architects getting rich off Obamacare. Another Obamacare architect,  Jonathon Gruber, Fired after Fraudulent Billing Probe.


Vermont Attorney General T.J. Donovan said his office has concluded an investigation into the invoices and billing practices of Dr. Jonathan Gruber, an economic consultant who contracted with the state to provide policy expertise, research and economic modeling for Vermont’s abandoned single-payer healthcare system.

Former Gov. Peter Shumlin sought to create the single-payer system, known as Green Mountain Care, but eventually walked away from the plan after determining it would cost too much. The attorney general’s office’s began the investigation into Gruber’s billing after receiving a referral by State Auditor Doug Hoffer.

Donovan said Thursday his office and Gruber reached an agreement to settle the state’s potential legal claim that Gruber submitted false claims to the state under Vermont’s Civil False Claims Act. Donovan said his office concluded that Gruber’s conduct violated the Vermont Civil False Claims Act. Gruber denied a violation, but in order to resolve the case, he agreed to forgo any further payments from the state that he might be owed.

Speaking of Gruber, Obamacares litany of lies are resurfacing, and consumers will pay the price.
Medicare Expansion: What Could Go Wrong? Using Medicaid as an example, plenty. Estimated $72 Million in Medicaid Payments Made to Ineligible Beneficiaries, and that's just Kentucky. I expect it's far from the worst offender.

Trump could moot this dispute at any time by refusing to make the CSR payments to the insurers. However, the CBO report predicts a number of unintended consequences if he does. It could save $118 billion in CSR payments over the next decade, but insurers – still stuck with the statutory requirement to lower out-of-pocket costs in Silver plans – would have to raise their premiums by as much as 25 percent, the CBO predicts. Enrollees only pay a set fee for insurance at all levels based on their income, benchmarked on the Silver plan, so taxpayers would end up footing the bill not just for the increased subsidies on these specific Silver plans but all plans. That would increase subsidies by $365 billion in the same time period, resulting in a net increase of deficit spending of nearly $200 billion. 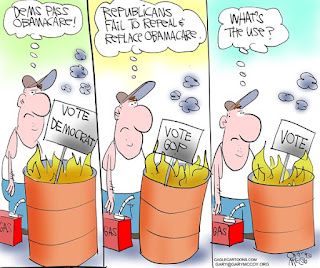 Repealing ObamaCare Is The Key To Restoring Economic Growth That might be an overstatement, but it would help. McCain: 'I Still Believe' Obamacare Can be Replaced; 'I Believe We Must'. Then why did you stop it; just to spit on Trump?  Health Care: Is It Time to Replace the Majority Leader? I have no emotional attachment to Mitch. Could A Democratic Corruption Scandal Help Repeal ObamaCare? If Bob Menendez is tossed out of the Senate for corruption, Gov. Christy gets to name his successor. It could be the final nail in Obamacare's coffin.

Keith Ellison: Pelosi Supports Single-Payer But Doesn’t Want To Say So In Public.


“Is anybody taping me right now? OK, so, you may have heard that Nancy [Pelosi] is not for it, but that’s not really true,” Ellison said. “Nancy has to represent a very diverse caucus. She does not like getting out ahead of the caucus too fast. So she’s trying to get, she’s, you know, you know, she actually likes the concept.”

“She’s trying to get, you know, you know, she actually likes the concept. She says it’s the best way to do it. She says it’s the cheapest way to do it, but she’s got to make sure that she brings our Blue Dog friends along,” Ellison added. “And by the way, for any of us progressives who get mad at the Blue Dogs, if we didn’t have them, some of them would be replaced by Republicans.”