Reason #5667 That Trump Was Elected 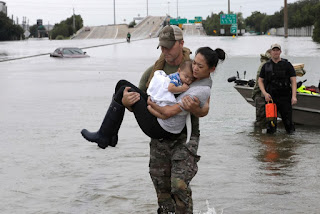 Professors: via Wombat-socho's "In The Mailbox: 08.29.17" The Weasel Zipper brings us the "Professor: Texans ‘Deserve’ Harvey Because They Voted For Trump"


Meanwhile, some mean evil people who like Confederate flags are in boats rescuing people, including black people, in Texas because they actually care about people and aren’t looking at race or politics. Love trumps hate.


A sociology professor at the University of Tampa published a tweet on Sunday afternoon suggesting that Texas residents deserve the death, destruction and suffering caused by Hurricane Harvey because a majority of Texas voters supported Donald Trump in the 2016 presidential election.
The professor is Kenneth L. Storey, reports Campus Reform.
“I don’t believe in instant Karma but this kinda feels like it for Texas. Hopefully this will help them realize the GOP doesn’t care about them,” Storey wrote in one tweet. 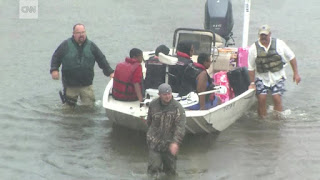 When another Twitter user responded that Texas is home to “good people” and that Storey “may want to rethink” the tweet, Storey doubled down.
“Well, the good people there need to do more to stop the evil their state pushes. I’m only blaming those who support the GOP there,” Storey wrote.
. . .
The University of Tampa webpage for Storey describes him as a visiting assistant professor. He has a master’s degree from the University of Central Florida and he teaches an introductory course in sociology. His research involves “urban issues within the southeastern United States, including research in gun shows, planned communities and unique issues of tourism focused commercial districts.”

Never mind that Houston, like most concentrated urban areas, is ruled by the Democrats. He later deleted his twitter account, but the internet never forgets, and rarely forgives. A visiting professor without a PhD? I'm gonna guess he's already gone.

With his time line slightly inverted in "Late Night With In The Mailbox: 08.28.17", Wombat brings us Twitchy:  Will This “Keep Your Job” Tweet Work For Prof Who Called Harvey Flooding “Instant Karma” For Texas?

Resign immediately. You're only sorry you got caught. Your comment is so disgusting, so disturbing.#Resign
— #ThePersistence (@ScottPresler) August 28, 2017


UPDATE: Yep, Already gone: A university professor suggested Harvey was karma for Texas Republicans. Then, he was fired.


In a statement Tuesday, the university denounced Storey’s comments, saying they were made on his private Twitter account and do not reflect the school’s views.

“We condemn the comments and the sentiment behind them, and understand the pain this irresponsible act has caused,” the university said, adding that other faculty members will take over Storey’s classes. “As Floridians, we are well aware of the destruction and suffering associated with tropical weather. Our thoughts and prayers are with all impacted by Hurricane Harvey.”