Fierce Competition for Floron of the Week

Three strive for greatness, but only one can take home the prize. 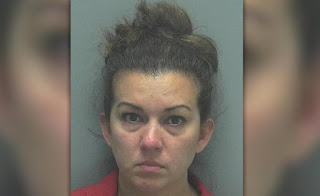 
An officer caught a woman in a Lee County school parent pick-up line snorting cocaine off her iPhone.

The report states the school resource officer at Lexington Middle School spotted Christina Hester, 39, through a second-floor window chopping a white substance on her phone. The officer said he saw Hester use a straw to snort the cocaine.

What, does she think this is still the 80s?


A Delray Beach man wasn't happy that a nearby McDonald's didn't have any ice cream, so he pulled out a replica AR-15 rifle while he waited in the drive-thru line, police said.

Jerry Henry was arrested Monday after the incident at the McDonald's on Linton Boulevard.

Delray Beach police said Henry was a passenger in a car at the drive-thru when the driver, who was ordering food at the intercom, became upset with the employee who was taking his order.

According to a probable cause affidavit, the driver, identified as Michael Delhomme, was upset because the ice cream machine wasn't working.

But going to the finals for Floron of the year: Jacksonville Beach police use 3 Tasers, baton, 4 handcuffs to arrest bar customer


Jacksonville Beach police used a Taser, a baton and four sets of handcuffs to arrest a man accused of punching a bouncer and walking out on his $235 bar tab on Sunday.

Facebook video of the takedown outside Surfer [the Bar] on 1st Street North is leading some beachgoers to question why the use of force was necessary in the first place, since Christopher Alan White did not appear combative when a Jacksonville Beach Police Department officer deployed the first Taser.

White pulled the prongs off the first Taser, seemingly unaffected.

“Stop doing that,” White can be heard saying in the video.

That comment led to a second Taser deployment from a second officer as well as an attempted headlock, from which White wriggled free.

“I’m not fighting,” said White as an officer beat his thigh with a baton.

White swatted at the officer during the beating.

A third officer deployed a third Taser, which brought White to the ground.

Jacksonville Beach resident Annsley Grantham said she’s disturbed about what led up to the first Taser being fired.
“He seemed pretty inebriated, so I don’t think it was necessary to tase him at all,” said Grantham.

And best of all, it's recorded on video: