I Learned a Little Today 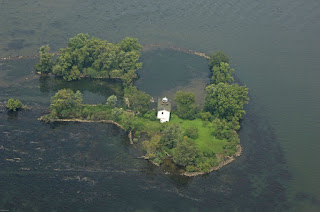 Always a plus. A place I knew a little about, but not too much: The lost Donahoo lighthouse is local secret

The non-boater might nod and understand the topic of the “the flats” realizing the topic is the Susquehanna Flats, even if they can’t readily identify the exact location. When referred to as the local jesting nickname of “Redneck Riviera,” the confusion returns. But the one that seems to really cause confused knitted brows is “FBI.” To a boater, the conversation might entail, “Wow, FBI was packed this weekend, we couldn’t find a spot to anchor out.”

To the uninitiated land-based, the FBI referred to is not of the James Comey variety but of the Donahoo type, as in John Donahoo, the famed Chesapeake area lighthouse builder of the early 1800s. FBI is the local term for Fishing Battery Island, an artificial island created by Robert Gale and the aforementioned Donahoo in an effort to profit from the shad runs near the Susquehanna’s mouth. Back then the paddleboats couldn’t enter Havre de Grace’s shallow port, so they called at a diminutive man-made island and loaded up with fish caught in the nets strung over the Susquehanna Flats. Those hauls of fish would then be hauled to Baltimore for a tidy profit.

I remember the Fishing Battery Island well, from several trips to fish the Susquehanna Flats with Pete. The Susky flats are the round knob at the upper end of the Chesapeake Bay. Geologically speaking, they are the remainders of a river delta formed by the Susquehanna at a slightly lower stand of sea level. They are shallow, and full of "ditches" which are the remnants of a dendritic set of channels through the old delta. Large Striped Bass sometimes school there in large numbers in spring to gorge on herring and shad, and to await the spawn, which usually occurs in the waters just to the south.

Fishing Battery Island is in that little curlicue island in the lower left of the flats.


Over time, the little island came to house not only a fish house but a landing ramp, housing and processing facilities, all in pretty close quarters as the island only measured a bit over an acre at its maximize girth. When originally crafted in total defiance of the real estate axiom that “they aren’t building any more waterfront property,” it was called Donahoo’s Battery, but became known as Fishing Battery and briefly Shad Battery.

By the antebellum mid-1800s, however, Congress appropriated $5,000 on March 3, 1851, for construction of a lighthouse at Fishing Battery, and would call in lighthouse builder Donahoo to erect it. It was the last of the lighthouse he built on the shores of Chesapeake Bay. Two others he built locally would be the oft photographed and visited, Concord Point Lighthouse in Havre de Grace and Turkey Point Lighthouse in North East at the tip of the Elk Neck peninsula. 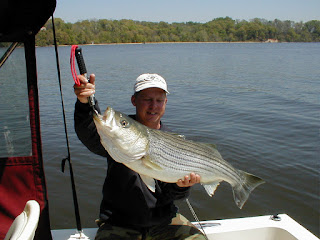 I searched my photos for a picture of Fishing Battery Island, but I couldn't find any. I suspect I was too busy casting. So instead, here's Pete with a fine flats striper from 2002.


Though there is scant evidence of the original buildings of the island as they continue to rot, fall prey to vandalism and neglect, and that which is visible is obscured by out-of-control vines, weeds and scrub, period photographs help to tell the tale. The lighthouse was a story-and-a-half tall and built of brick with a lantern room at the very center of the pitched roof. Built in 1853, the original light was five lamps with 14-inch reflectors, upgraded to a sixth order Fresnel lens.

The island was leased for 30 years, from 1861 to 1891 by the Bureau of Fisheries, during which time more buildings were added and the grade of the island was raised. The keeper’s family would come to live on the second floor of the house, with the bottom floor used to store boats and for other storage. In 1887, a mechanic’s cottage, storehouse, icehouse, water tower, boat basin, coal bins and a boiler had been added to the island, to accompany the fish basin, hatchery and gated shad pond.

As with all lighthouses, automation ended the need for a lighthouse keeper to live on the island and as American men marched off to fight in World War II, Fishing Battery Island was deeded to the Department of the Interior for a migratory bird and wildlife refuge.