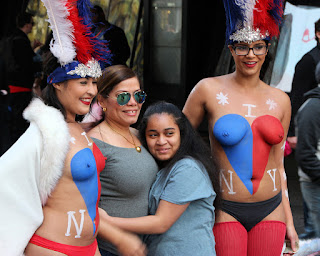 Cops claim they are powerless to arrest naked women harassing tourists in Times Square 'because most of them are illegal immigrants' . Hence the name "desnudas"


The costumed characters crowding Times Square everyday are not fans of people trying to reign them in.

And even with the last year announcement of New York City's Designated Activity Zones (DAZs), the city-mandated areas created for desnuda's to ask for tips, many are annoyed with law enforcement's lack of enforcing the policy. 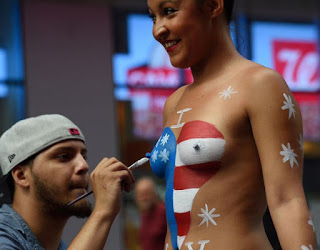 Law-enforcement reportedly write off the need to ticket, adding that the officers' hands were tied since most of the costumed panhandlers are illegal immigrants and under Bill de Blasio's administration, going after them would be difficult.

Desnudas are painted nude panhandlers that are often colored in star-spangled patterns and walk the streets of Times Square. 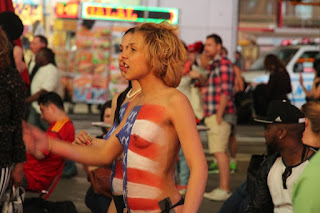 The New York Post sent a reporter to go out and interact with the desnudas and other panhandlers and were greeted with insults and wild gestures.

'I told you, if you don't have a tip, then f*** off!' one star-spangled desnuda said to a Post reporter.