From Dienekes' Blog, this abstract for a paper reporting the first publication of the sequence of the Neandertal Y-chromosome. As you probably know the Y-chromosome is a chromosome that in humans (and all mammals as far as I know) determines sex (let's not get into a fight about "gender"). A female has 2 X-chromosomes, and a male has a Y and an X. Whether a sperm cell carries the single Y or X determines the sex of the baby, thus Y-chromosomes get passed father to son, while X-chromosomes get passed from both male and female. We also know that at some point (probably many points, people being people) early modern man bred with Neandertals another early human, the Denisovans, and the result left traces of their genes in our own. However, according to this article, no trace of the Neandertal Y-chromosome is found in the modern human:

The Divergence of Neandertal and Modern Human Y Chromosomes . . .

Sequencing the genomes of extinct hominids has reshaped our understanding of modern human origins. Here, we analyze ∼120 kb of exome-captured Y-chromosome DNA from a Neandertal individual from El Sidrón, Spain. We investigate its divergence from orthologous chimpanzee and modern human sequences and find strong support for a model that places the Neandertal lineage as an outgroup to modern human Y chromosomes—including A00, the highly divergent basal haplogroup. We estimate that the time to the most recent common ancestor (TMRCA) of Neandertal and modern human Y chromosomes is ∼588 thousand years ago (kya) (95% confidence interval [CI]: 447–806 kya). This is ∼2.1 (95% CI: 1.7–2.9) times longer than the TMRCA of A00 and other extant modern human Y-chromosome lineages. This estimate suggests that the Y-chromosome divergence mirrors the population divergence of Neandertals and modern human ancestors, and it refutes alternative scenarios of a relatively recent or super-archaic origin of Neandertal Y chromosomes. The fact that the Neandertal Y we describe has never been observed in modern humans suggests that the lineage is most likely extinct. We identify protein-coding differences between Neandertal and modern human Y chromosomes, including potentially damaging changes to PCDH11Y, TMSB4Y, USP9Y, and KDM5D. Three of these changes are missense mutations in genes that produce male-specific minor histocompatibility (H-Y) antigens. Antigens derived from KDM5D, for example, are thought to elicit a maternal immune response during gestation. It is possible that incompatibilities at one or more of these genes played a role in the reproductive isolation of the two groups.

The authors wave a few biochemical wands to explain why there are no remnants of Neandertal Y- chromosome genes. First, since Y-chromosomes essentially never occur in pairs (except the rare and deleterious XYY combination), there's rarely any crossover. The single Y-chromosome inherited from the father either has to work, or the enterprise fails. If the Neandertal Y chromosome in a hypothetical Neandertal/Human cross fails for any reason, that Y-chromosome line fail. Daughters may be born with Neandertal X-chromosomes, since a human X is also present to cover deficiencies. 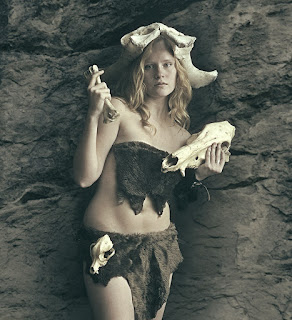 But let me propose another, slightly racist explanation. There are no Neandertal Y-chromosomes (or their remains) in the human genome because it was never (or at least very rarely) a case that the Neandertal male mated with  human female, and the resulting offspring were incorporated into human society. Neandertal women may have been captured and mated, or even traded for, but male Neandertals did not join human society, mate with human women and the resulting offspring kept.

Now, it could be that Neandertals also captured/bought human females and mated with them, and incorporated some human DNA, but we have little evidence of that because the Neandertal line itself went extinct, and any human DNA in their fossil genes is being considered as Neandertal.

Wombat-socho has the grand linkfest "Rule 5 Sunday: The Tax Deadline Cometh" up at The Other McCain.
Posted by Fritz at 6:00 AM